In recent years, a Microgrid has become important and commonly use. A microgrid is localized of electricity sources and loads that connect to centralized electrical power network when the need arises and disconnect to island mode. In this case, a microgrid can effectively integrate various sources of distribution generator, that can supply improving the level of voltage on the transmission line by reducing the real power losses in line and providing emergency power, also improving the voltage level at the consumer end. Accelerated Particle Swarm Optimization technique was applied in this paper, it is a modern technique appeared for optimization ,  and was compared with standard Particle Swarm Optimization technique to perform the optimization operation of power flow in transmission line by selection the optimum location of microgrid installed in power network considering minimum power losses with optimal operation consideration the no. of iteration, execution time of program and capacity. The results of simulation obtained for optimization the nonlinear objective functions using MATLAB program designate that APSO accomplishes roughly developments in terms of computation time and best fitness.

In recent years, a Microgrid has become significant and commonly use. A Microgrid has localized of electricity sources and loads that connect to centralized electrical power network when the need arises and disconnect to island mode. In this case, a microgrid can effectively integrate various sources of distribution generator, that can supply improving the level of voltage on the transmission line by reducing the real power losses on it and providing emergency power, also improving the voltage level at the consumer end. In this paper, the Accelerated Particle Swarm Optimization technique was applied, it is a modern technique appeared for optimization ,and was compared with standard Particle Swarm Optimization technique to perform the optimization operation of power flow in transmission line by selection the optimum location of microgrid installed in power network considering minimum power losses with optimal operation consideration the no. of iteration, execution time of program and capacity. The results of simulation obtained for optimization the nonlinear objective functions using MATLAB program designate that APSO accomplishes roughly developments regarding computation time and best fitness.

A microgrid is an isolated power system that can manage intelligent distribution power resources, interconnected loads, and can work in parallel with or independently of the network. In the same mood, electric power can be provided economically, while enhancing the quality and reliability of energy by integrating and improving energy sources. However, the validity of a microgrid network depends on the combination of power sources, size or capacity allocated and the transmission strategy [1]. Wind energy is a promising technology commonly used in microgrid networks [2,3] Since the Winds are a clean energy source that is available everywhere and is available free of charge, but it depends to a great extent on on-site meteorology [4].

To minimize the loss, a microgrid site has a key role. The losses are reduced to a minimum amount by increasing the size of the installed generator [6,7]. The selection of the suitable site of distribution generator in the system also plays a main role in reducing the active power losses [8], interactive and interactive. In this paper, many investigations have future different methods to decrease losses of the system. A Distribution Generator (DG) can also reduce the cost of the network upgrade, however, if the location of  distribution generator is not realistic, on the conflicting, may lead to an increase energy loss, so, the preparation and scaling size of distribution generator depends on the minimum transmission loss; send traditional power system,and power transmission distribution is managed together [9].

In this research, we proposed a schematic  for the loss reduction system, the 4-step loss reduction plan, as described below, includes a divided into sections including analysis of the load flow, acquisition of the voltage profile, control, and reduction of losses and optimization using an approach based on two algorithms are obtained for the placement of DG, the PSO, and APSO, and monitor the data profile [10].

In the year 1995, J. Kennedy and R. Eberhart have developed the PSO technique, based on the attitude of a swarm such as bird and ﬁsh education in Nature. There are at least twenty variants of PSO technique, and hybrid algorithms were combining by PSO technique with other remaining algorithms. A PSO technique exploration for object planetary by regulating the paths of individual factors, called particles, as cross-sections made up of topical vectors in a semi-stochastic manner. Article movement factors consist of two main components: an unavoidable element and a random component. Each particle is attracted to the best current position G and the best   site in history, while at the same time tends to transfer arbitrarily. Let be the vector location xi and the particles velocity vi  of  i, respectively so the new speed transducer is calculated by the following formula:

Where each the random vectors and  values are taken between (0 to 1). The acceleration parameters constants α and β are the of or learning parameters, which can usually taken as (α ≈ β ≈ 2). The most well-known optimization is most likely to use inertial function θ(t) so that  is replaced by  as given:

And the update of the position is given as:

When required the diversity in quality solutions increase, improving the standard PSO uses both the best position individual . And the global best g*. A diversity was simulated by using randomization for using the best individual is mainly. Later, there is no convincingly motive to use the best individuals, except the problem optimization is multimodal and extremely nonlinear. A basic model that can accelerate the meeting of the procedure is to use the globally better only. Thus, in this way of the acceleration the of particle swarm optimization [11, 12], the velocity vector is generated by equation:

Where:  is outgoing N (0,1) to replace the next term. To increase the convergence more, we can also write the location update in one step:

Usually, α = 0.1K to 0.5K where K is the measure of each variable, and β select from 0.1 to 0.7 for suitable in most applications. There is no requirement to accord with the vectors of velocity formation, so be noted that speed does not appear in equation (5) therefore APSO is much simpler, and the mechanism is easy to understand. Compared with many standard PSO variables, the APSO uses exclusive two parameters, another improvement in the accelerated PSO system is to reduce randomization while duplicates persist by using a monotonous decrease function like:

Where: α0 approximately from 0.5 to 1 is the initial value of the random parameter. Here t is the number of duplicates or time steps, and γ  is a control parameter [12]. For example, in this application, we will use:

In the power systems, the dispatch of reactive electricity power may have different goals, such as obtaining the best voltage quality, reducing the real power losses. Considered the voltage magnitude is |Vi| and |Vj| at buses i and j respectively so, the power loss as an objective function and described by the formula:

Where M is the number of branches, while the angle θij is the difference in phase of voltage angle at bus i, and bus j respectively, and gij represent the branch conductance of impedance between the buses i and j.

There are two constraints dispatch issue of reactive power, equality and inequality constraints as follows:

ii. Inequality Constraint: It’s the voltage magnitude range value, tap changing transformer positions value, and injection reactive power to the system. In this paper and based upon the data of the IEEE 30-buses system, the voltage magnitude values were selected from 0.950 p.u to 1.10 p.u, and the tap changing transformer range is usually from 0.975 to 1.025. The compensators injection of reactive power to the system from 0 MVAR  to 20  MVAR. The inequality constraint was given by the following relations[14,16]:

So, the objective function given in Equation 9 can be expressed by follows:

And the values of voltage magnitude, tap changing transformer, and injection reactive power described as follows:

This paper examines the possibility of using wind power energy for electricity generation at optimum conditions and simulation network for an IEEE 30 -buses, which consists of 30 busbars was connected via 38 transmission lines, is considered for this study. The objectives are to identify more economic technology and the environmental merit of the wind microgrid.

The estimated electrical real power generation of 300 MW while the valued electrical load The consumption of    285 MW. A MATLAB program was used to analyze the system they allow comparison with different design options.

The proposed technique is performed and verified on the IEEE 30 busbars network. The power system network construction of 30-buses was indicated in Figure 1. In this network, there are 6-generators in the system, one on the bus slack and the other on the buses 2,5,8,11, and 13 respectively. There are 4-tap changer transformers between buses (4,12), (6,9), (6,10) ,and (27.28). There are 2-synchronous capacitors on bus 10, and bus 24 respectively. 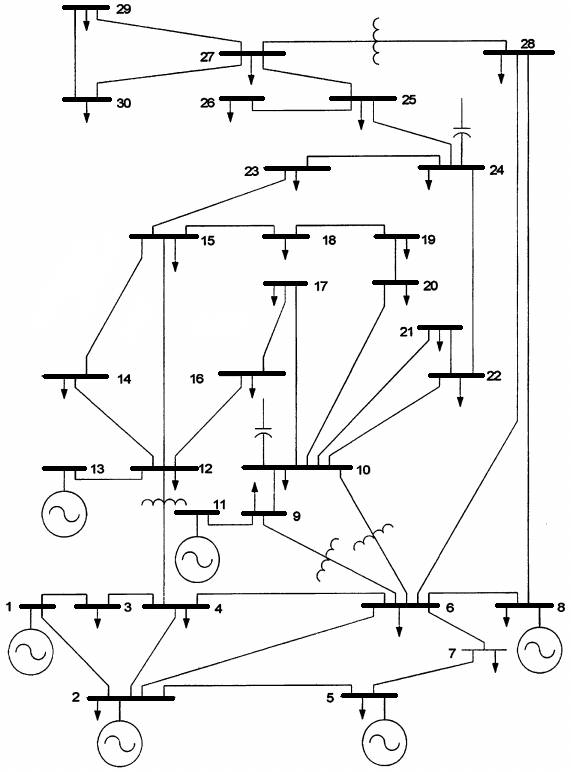 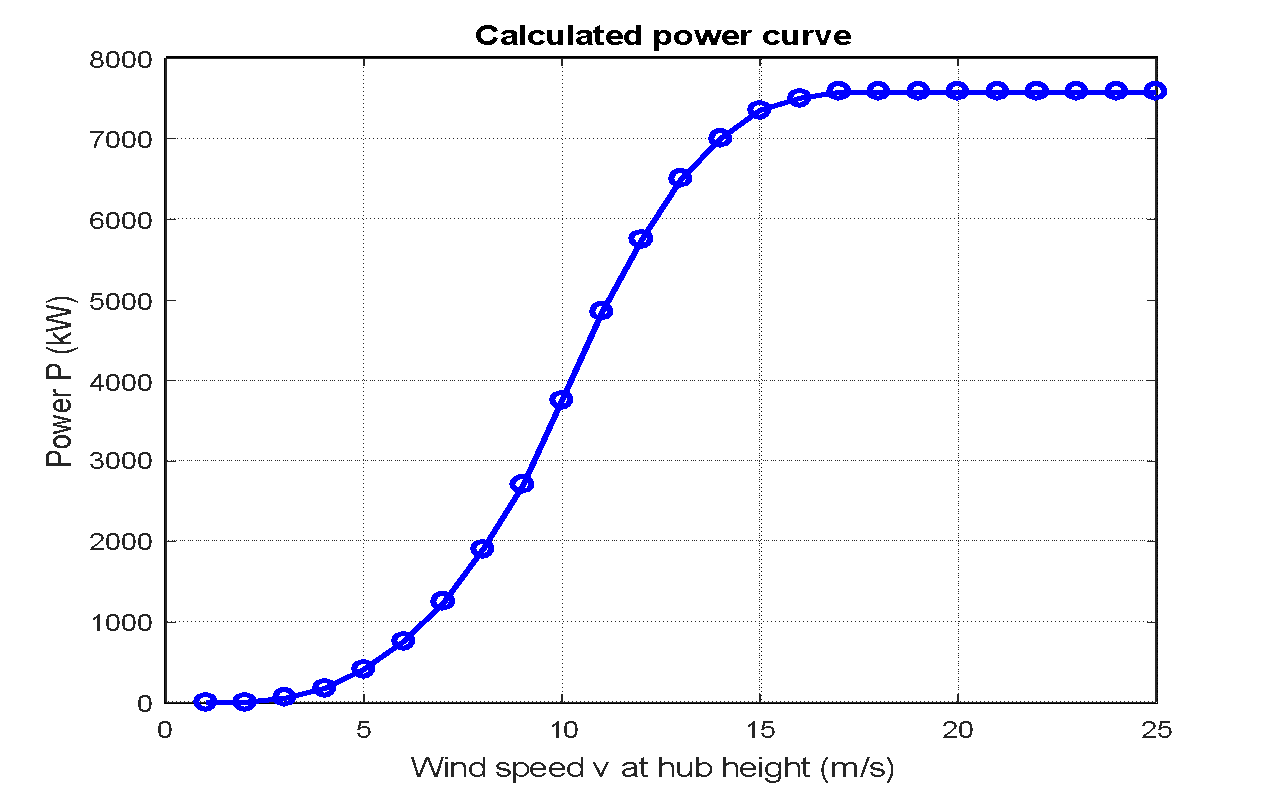 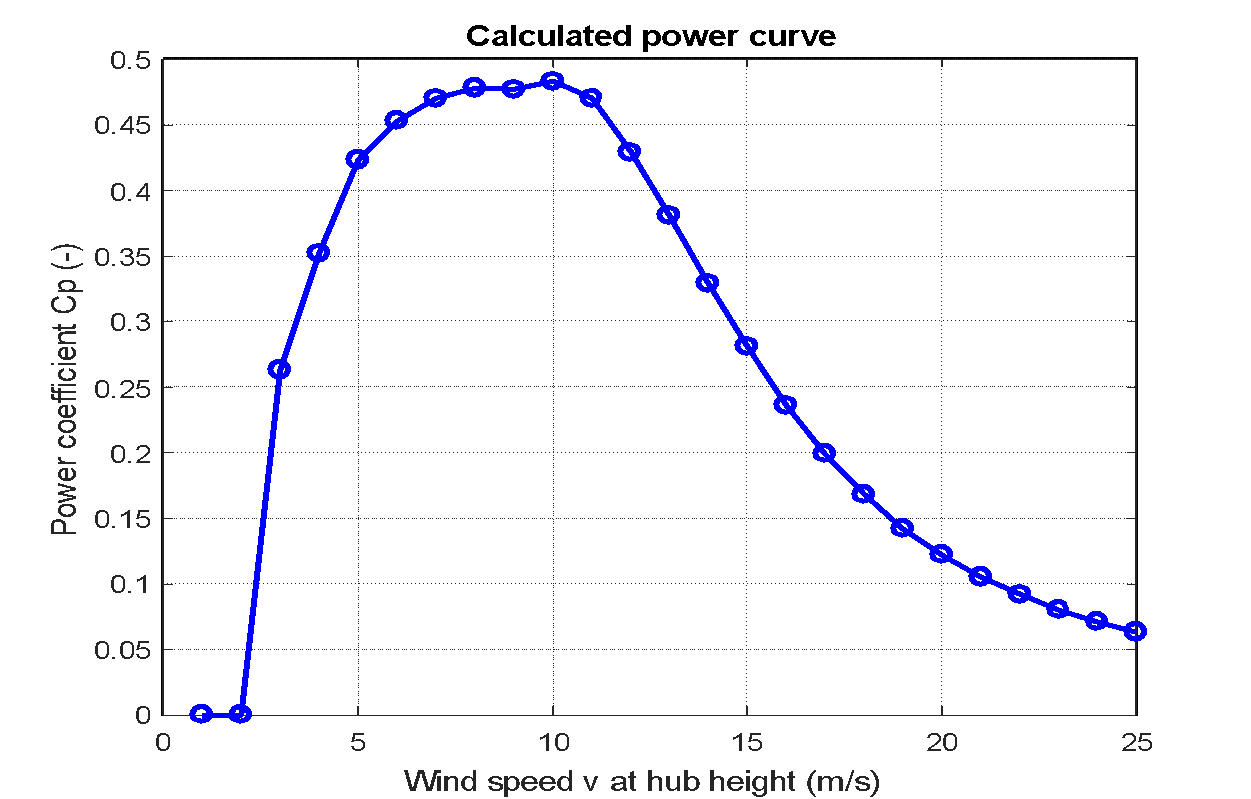 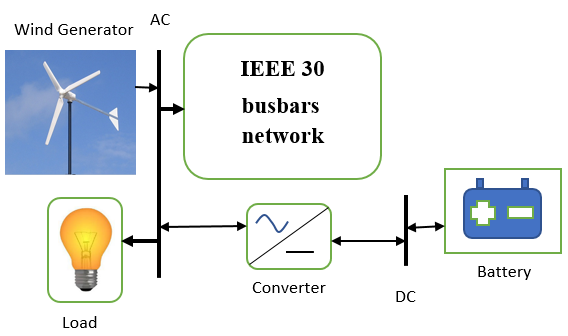 The minimum inertia weight was selected as 0.45, and the maximum weight limitations were selected as 0.95. With continuous repetition, the weight value will drop from 0.95 to 0.45.

In this section, we show all the results obtained from running the MATLAB program for standard PSO and APSO techniques:

Figure 5 shows the process of optimizing interactive power transmission with Installation of wind generator at the optimum location of bus no. 24, for the PSO technique, when the optimization is starting development, the position of the particles are chosen arbitrarily. The global real optimum power loss is 16.58 MW, then the particles constantly update their attitudes towards the better solution, the loss of active power remains to decline. Later 45 iterations, there can be no clear upgrading observed. Finally, the loss of real power is close to 15.15 MW.

Figure 7 shows the actual power loss per branch before and after installed DG at the optimum location by using PSO and APSO techniques. This figure illustrates the loss of active power in most lines slightly decrease, (as branches from 1 to 6) when using APSO technique so the total real power loss of 30 the bus system was greatly reduced and the higher losses in each branch when using PSO without wind turbine generator. 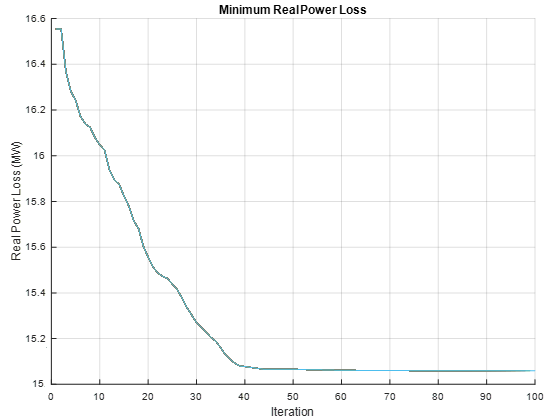 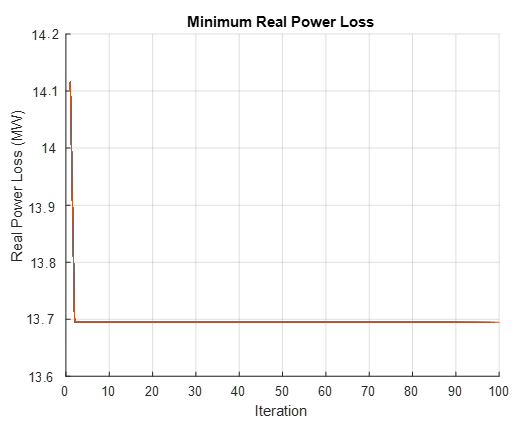 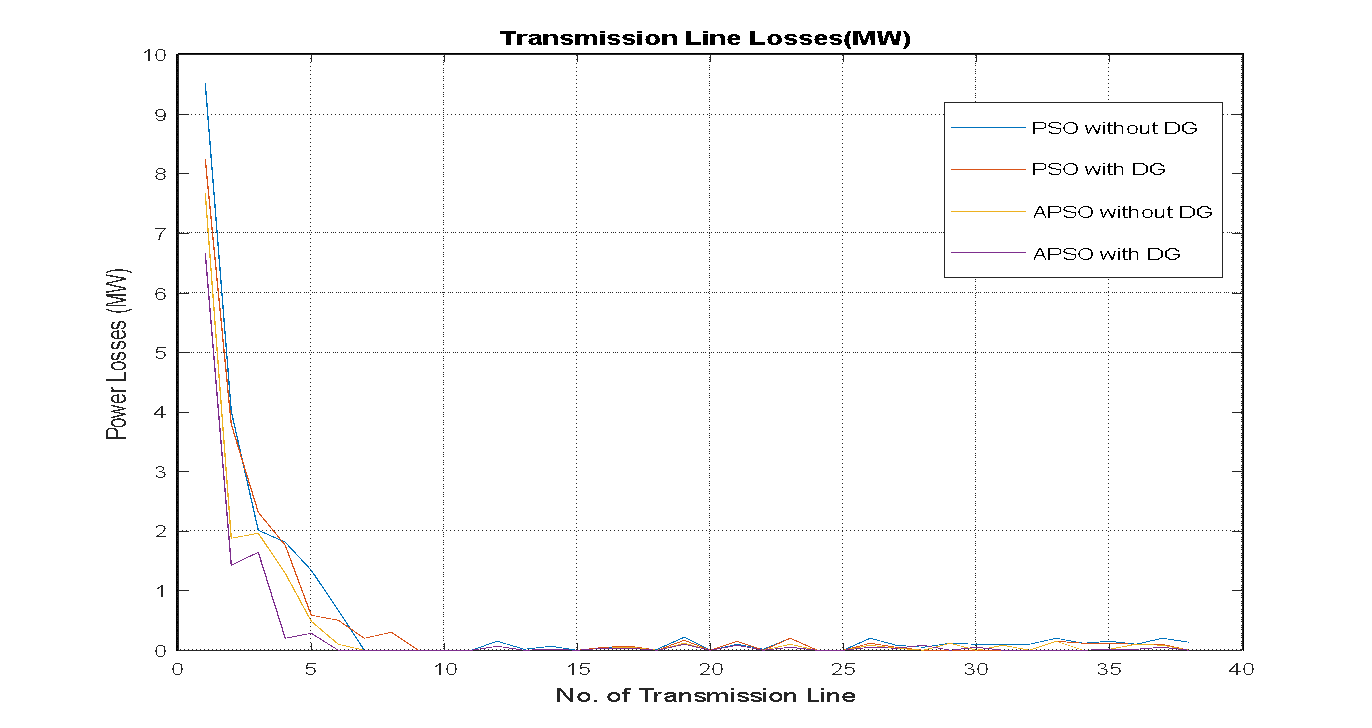 Figure 7:  The Real Power Loss at Each Branch 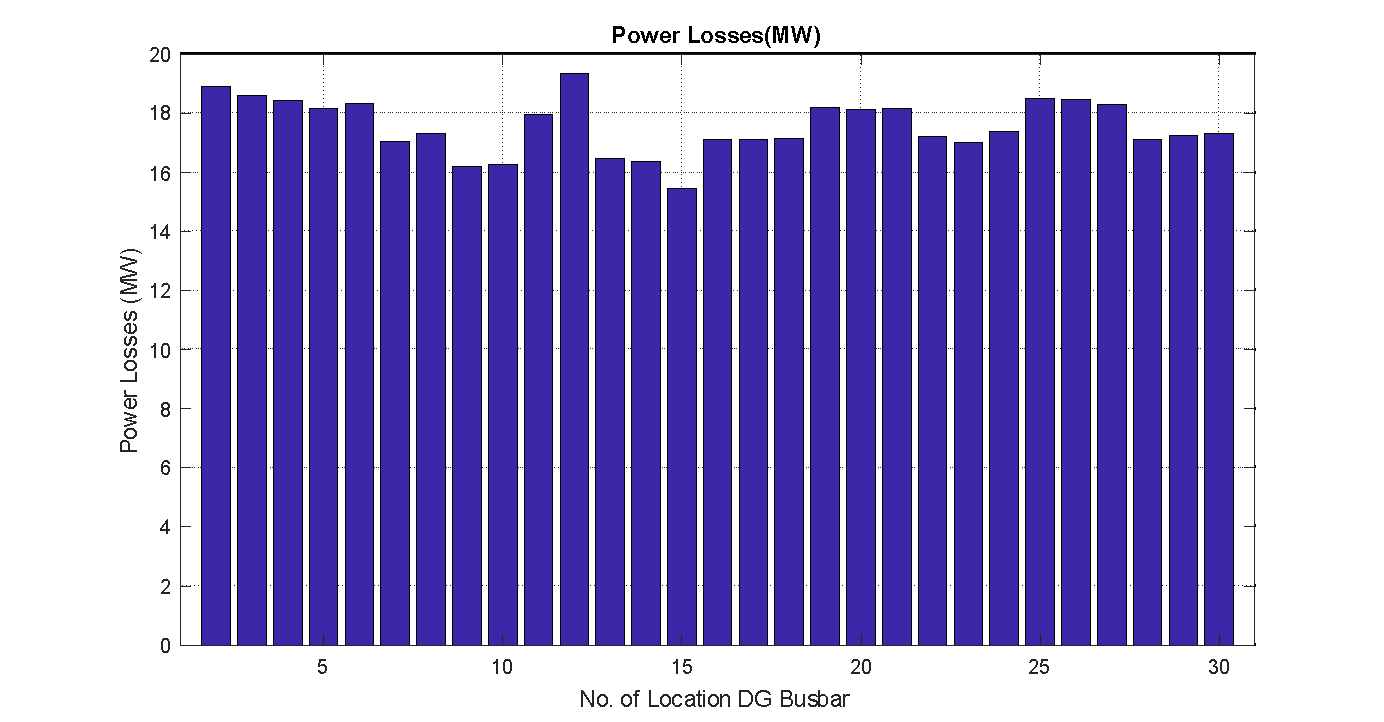 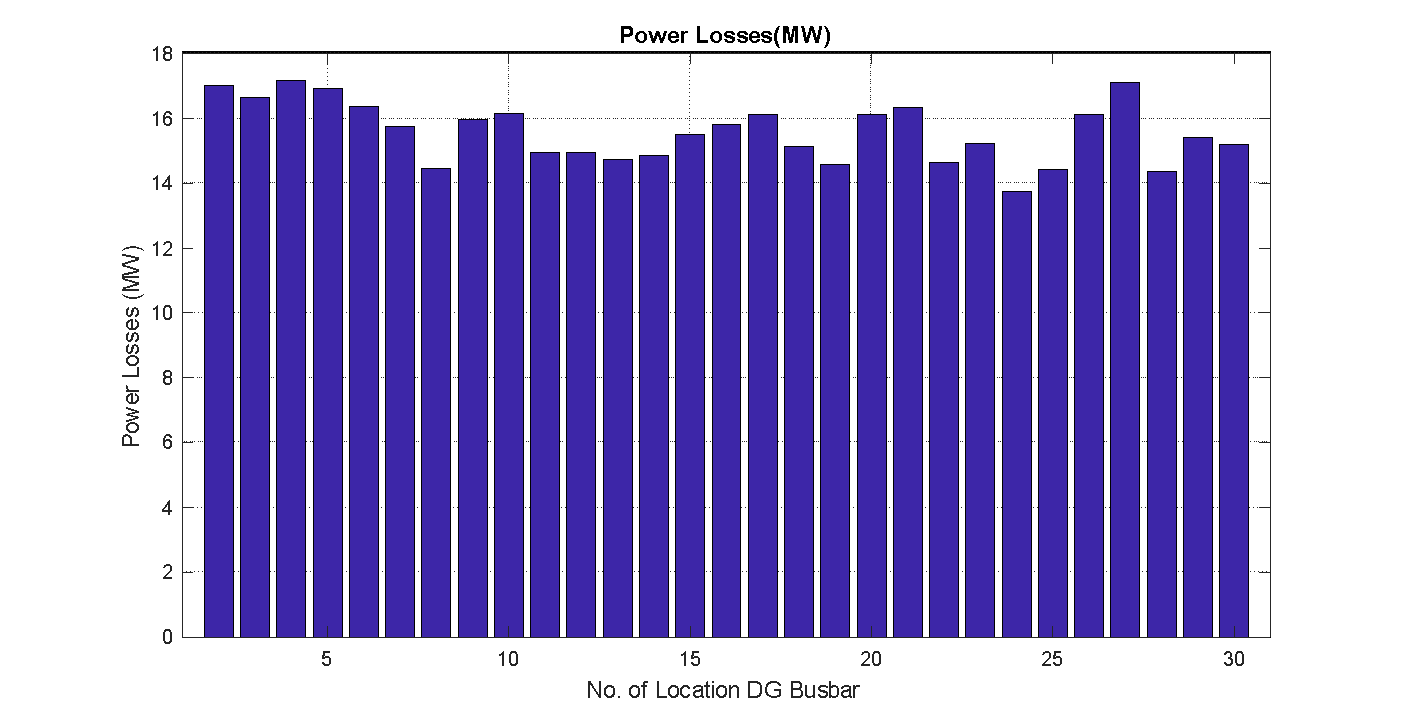 The voltage profile was evaluated using The Fast-Decoupled Load Flow (FDLF) method then calculate the real power loss of the system. After that put wind generator at each bus to estimate the total corresponding real power losses to obtain the optimal location of the DG when the total loss accord. This paper provides a new technique proposed solution to determine the optimal location of the DG in the power system. The proposed approach is based on the APSO technique and aims at the identification of the position of the load is different and compare the results with the applied standard PSO technique. Figure 11 shows the magnitude voltage profile for different cases for PSO and APSO techniques with and without, the figure illustrates the voltage magnitude will be improved when using APSO with an installed wind generator. Also, Figure 12 explain the voltage phase angle also modified. 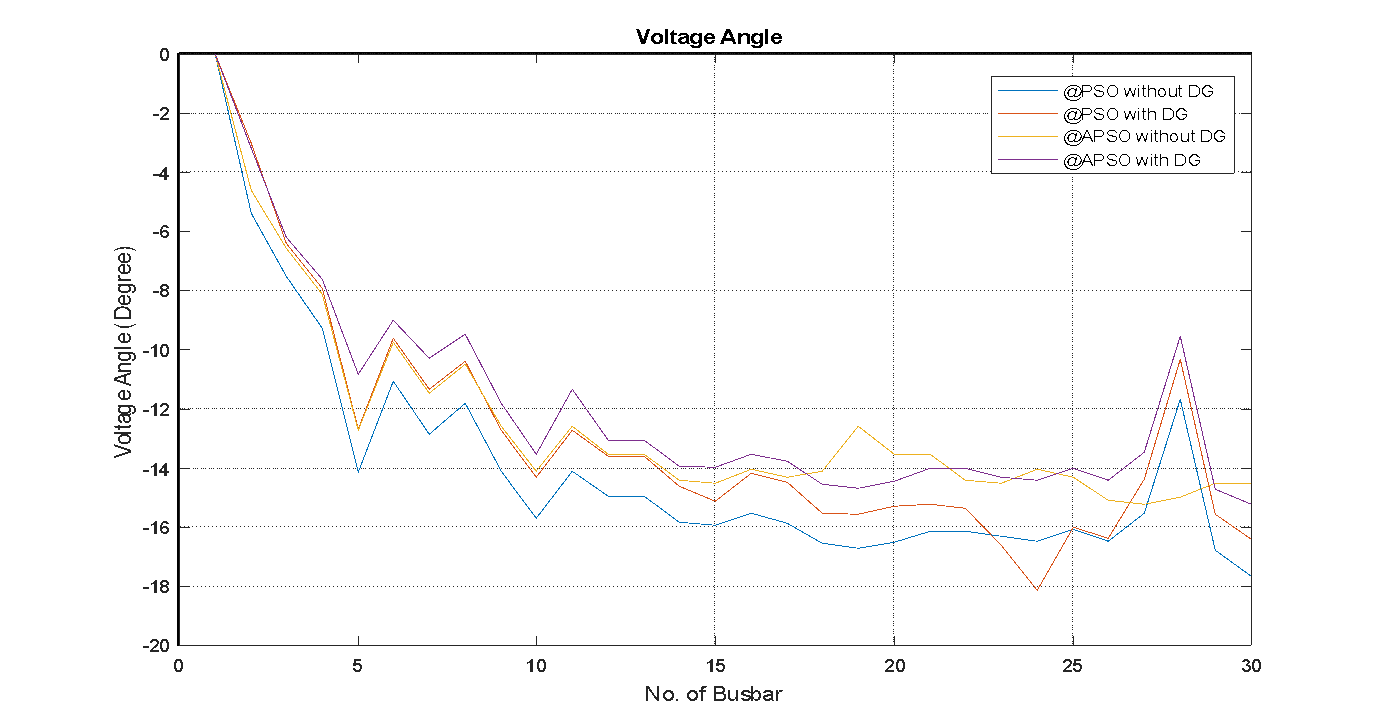 In this paper, the comparison between two techniques are used to identification of an optimum location by using standard particle swarm optimization technique and accelerated particle swarm optimization technique; the obtained results explain the affiant the APSO method when taking the consideration of iteration number, fast of execution time, reducing power losses, improve the power losses on the transmission line and optimize the power flow, and improve the magnitude and angle voltage profile.