Nanotechnology makes possible to obtain materials having non-ordinary properties. Such materials can be used in various fields of science and technology – biotechnology, for military purposes, in medicine, protection of environment, etc  [1-3]. Nanotechnology also helps forming scientific directions between specialities.

The properties of the same substance sharply differs depending on the sizes of its particles. Sharp change of physical and chemical properties in nanosize systems allows using such materials in different fields of technology. For example,  high-strength nanocrystal and amorphous materials are used to obtain thin films and heterostructures for mictoelectronics and optoelectronics, materials for chemistry and petrochemistry, in creation of new nanocomposition materials for transducers, in preparation of bio relevant tissues, medicals for transplantation.

Formation of nanostructures with non-ordinary  properties puts the demands on using new methods and materials. Use of electron and atomic force microscope is one of the important issues for defining the nanostructure of obtained structure [4-6]. One of the factors stimulating the development of nanotechnology is the creation of new electron devices using semi-conductor nanostructures basing to this technology.

According to military experts nanotechnology will change the character of modern military operations. This will be seen in armament, communication, protective military apparel, military medicine and so on.

Rhenium and its alloys are one of the substances which have wide application areas. Rhenium films containing chalcogen (S, Se and Te) are widely used in different fields of electronics [7-10]. Therefore, obtaining of semi-conductor triple rhenium alloys is of great importance. The main goal of scientific research work is electrochemical obtaining of thin nano-films of triple alloys on the basis of rhenium chalcogenide and studying their morphological structure.

IVIUMSTAT electrochemical analyzer – potentiostate was used to study electrochemical obtaining process of Re-Se-Cu thin films. Silver/silver chloride electrode was used as a reference electrode. Temperature is regulated with accuracy of ± 0.10C using U-10 thermostat. Current output was detected with copper coulombmeter by weighing method and was calculated with regard to the composition of precipitate. pH of solutions was determined at pH/mV/Temp AZ 86551. The composition of Re–Se–Cu alloy was analyzed as follows: firstly, electrochemically obtained cathode precipitate is heated and dissolved in 10ml of thick nitric acid, after vaporizing several times in water steam 5 N H3PO4 is added.

Then rhenium is separated from selenium and copper by extracting with isoamyl alcohol. When both Se and Re are separated, it is determined at SPECORD 50 PLUS using spectrophotometric method. Determination of copper in Re-Se-Cu system is conducted at AA 280 FS FAST Sequential Atomic Absorption Spectrometer Varian. X-ray analysis of Re-Se-Cu alloys thin films was conducted at“Bruker” Germany powdery “D2 Phaser” diffractometer in CuKα – radiation. Microstructure (morphology) of alloys obtained in Re-Se-Cu system was studied using Carle Zeiss; Model: Sigma VP SEM.

The impact of different factors (current density, temperature, density of components, pH of solution, electrode material, etc) was studied to investigate morphology and microsructure of thin nano films obtained in rhenium-copper-selenium system using electrochemical method. It was determined that the most useful temperature for obtaining of thin films of qualitative Re-Se-Cu coatings is 75-800C. Black greyish, thick, glowing Re-Se-Cu thin films are obtained at this temperature on cathode surface. One of the factors influencing on the morphology of nano films is a current density. According to the studies it was determined that more qualitative deposits are formed in lower current densities and owing to the increase in current density the sizes of crystals decrease. Upon studying the morphology of thin films obtained in Re-Se-Cu system by electrolysis it was determined that glowing, black greyish film is obtained in low current density, on cathode surface (5 mА/sm2). When current density is higher than 20 mА/sm2 black deposit which can be broken from the surface of a brittle metal base, is obtained. The influence of a current density on the appearance and structure of Re-Se-Cu thin films can be explained as follows: since diffusion of ions on electrode surface does not go slowly in current densities lower than limiting current, crystallization rate is found to be sufficient. After the formation of limiting current the approach of ions to electrode surface is complicated, this decreases the crystallization rate. The number of ions reduced on cathode surface decreases, some parts of a cathode surface become passive, crystallization goes only in active parts of a surface. Obtained deposit is brittle, unevenly distributed and firmly merged with a surface.  Figure 1 shows SEM analysis of the samples of electrochemically obtained Re-Se-Cu thin films on platinum electrode at 343K, for 1800 sec. in +0.5V potential. 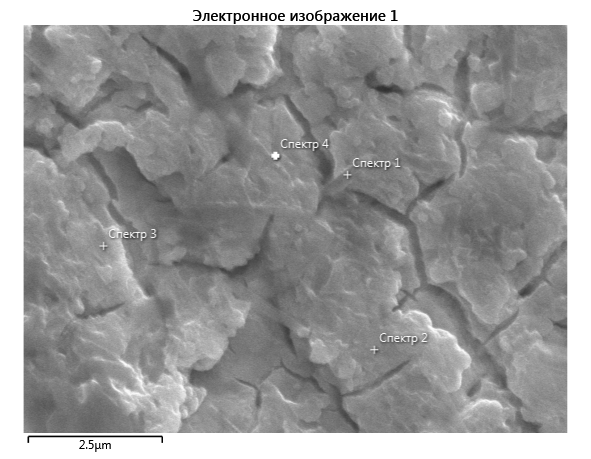 Figure 1. SEM analysis of the samples of electrochemically obtained Re-Se-Cu thin films on platinum electrode at 343K, for 1800 sec. in +0.5V potential 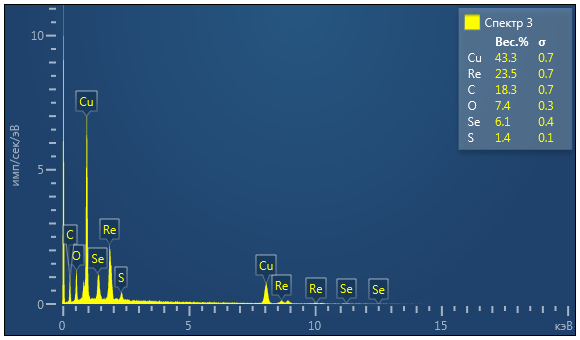 Morphology of electrochemically obtained Re−Se−Cu thin films was studied on different electrodes: copper, platinum and nickel electrodes. It was determined that sizes of Re-Se-Cu thin films are different depending on an electrode material. Films obtained from the same electrolyte and in the same current density on different electrodes are different. Therefore, the sizes of substances obtained on platinum electrode vary between 80−150 nm, but on copper electrode the sizes vary between   200−350 nm. Figure 1 (morphology of films) and figure 2 (elemental analysis of the composition of films) show the results of experiments. Chemical analysis of all elements in the sample obtained from electrolyte was conducted and reuslts of this analysis was presented in figure 2. For this purpose samples were taken from 3 different parts of the film obtained on platinum surface and its spectrum was recorded. As seen from the results of elemental analysis that the films are homogeneous for composition. Obviosity of differences between phases on the border of deposited and non-deposited parts  during the study of samples deposited on platinum electrode confirms the existence of different compositions here. During thorough study we observed a structure similar to a nanostructure. The formation of nanosize islanda on platinum sample with a definite law is observed. The sizes of islands vary between 180–350 nm. Islands does not have a definite form, they are in the form of an egg, ellipce and various forms. Morphology of electrochemically obtained Re-Se-Cu thin films was also studied on copper electrode.  It was determined that  the sizes of Re-Se-Cu thin films change depending on an electrode material. During SEM study square of cubic copper particles are clearly observed in copper samples. It should be noted that the sizes of deposited substance is less than the sizes of copper and sizes of deposited substance vary between 50–130 nm. Figure 4 shows SEM analysis of the samples of electrochemically obtained Re-Se-Cu thin films on platinum electrode at 343 K, for 1800 sec in +0.5V potential.

When studying X-ray structure of electrochemicall obtained Re-Se-Cu thin films on platinum electrode it was determined that these films contain oxide compounds. To purify the composition of films from different oxides the substances electrochemically obtained in system Re-Se-Cu were annealed at 5000C for 2 hours and X-ray pattern was recorded.  Intensity of peaks is celarly seen after annealing. This, pearhaps, is related to annealing of oxides in films 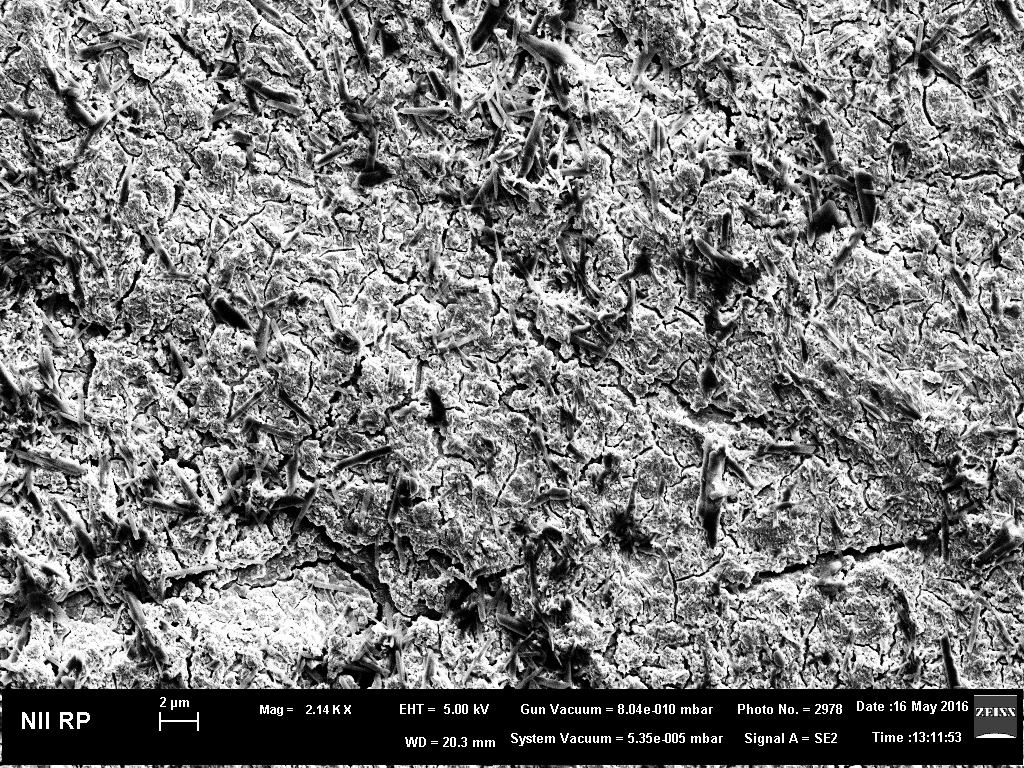 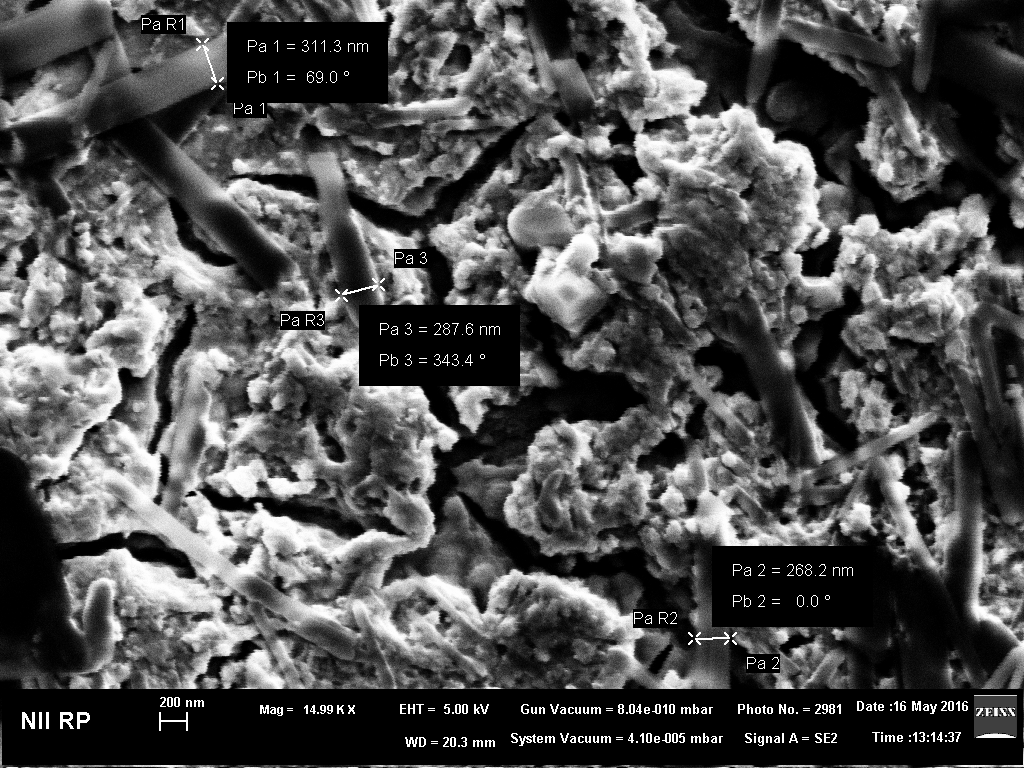 Figure 3: SEM analysis of the samples of electrochemically obtained Re-Se-Cu thin films on platinum electrode at 343 K, for 1800 sec in +0.5V potential. 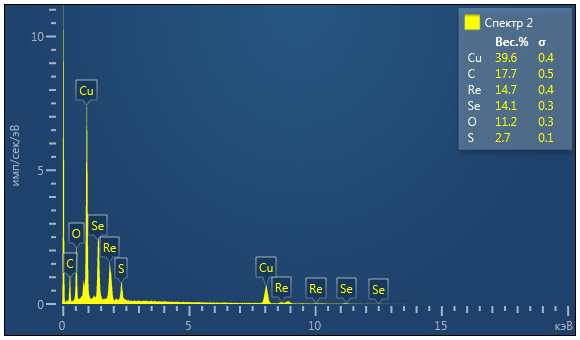 Figure 4:  SEM analysis of the samples of electrochemically obtained Re-Se-Cu thin films on copper electrode at 343 K, for 1800 sec in +0.5V potential.