In this paper, the dispersion compensating method is done by comparing two systems designed for high data rates 10 Gb/s, and laser source generated from CW laser at1552nm wavelength. The influence of EDFA power and increase in length of each system of fiber has been studied to evaluate the performance of optical communication systems. The performance characteristics like bit error rate, eye diagrams at the output is studied by simulating different systems. The two system is to comparing pulse generators (RZ &amp;NRZ) and photodiodes types (PIN &amp;APD) in one designed –compensation dispersion system, it is found that the later is superior to the former. Further, it has also been observed that system needs proper matching between the EDFA power and length of the fiber for most favorable show, besides the maximum fiber length in this system reach to 280 Km long.

In this paper, the dispersion compensating method is done by comparing two systems designed for high data rates 10 Gb/s, and laser source generated from CW laser at1552nm wavelength. The influence of EDFA power and increase in length of each system of fiber has been studied to evaluate the performance of optical communication systems. The performance characteristics like bit error rate, eye diagrams at the output is studied by simulating different systems. The two system is to comparing pulse generators (RZ & NRZ) and photodiodes types (PIN & APD) in one designed –compensation dispersion system, it is found that the later is superior to the former. Further, it has also been observed that system needs proper matching between the EDFA power and length of the fiber for most favorable show, besides the maximum fiber length in this system reach to 280 Km long.

Recently, there has been great interest in using single mode fibers [1] for high-bit-rate transmission in low loss transmission windows but dispersion is an important impairment that degrades overall system performance of an optical communication system. At high-bit-rate, the dispersion-induced broadening of short pulses propagating in the fiber causes crosstalk between the adjacent time slots, leading to errors when the communication distance increases beyond the dispersion length of the fiber [2]. as the channel communication system rate was increased, the tolerance for dispersion is strongly reduced. The advent of erbium-doped amplifiers (EDFAs) operating in the 1.55 lm region has increased the link distance as limited by fiber loss in optical communication systems. However, these amplifiers induce nonlinear effects, which not only limit the bit rate but also the propagation distance in an optical fiber link.

Dispersion management in single mode fiber links can be accomplished in many ways, though the most widely used approach employs lengths of transport fiber of opposite dispersion characteristics to the principal fiber in the link, usually standard single mode fiber (SSMF). Typically a 10 to 20km length of dispersion compensating fiber (DCF) is placed before the regenerators inducing negative dispersion to compensate for the positive dispersion accumulated over the 60 to 80km length of the SMF. Although the total dispersion over the entire SMF-DCF span can be minimal, net dispersion at any point along the span is non-zero, which keeps the nonlinear mixing effects at minimum levels. he following figure shows performance for an uncompensated (i.e., SMF span = 100km, and DCF span = 0km) link. The power map rises with the link length because the amplifier over-compensates for the attenuation at each span. Since there is no dispersion scheme employed, the accumulated dispersion for each wavelength produces a closed eye at the receiver even if the link is not power-limited. 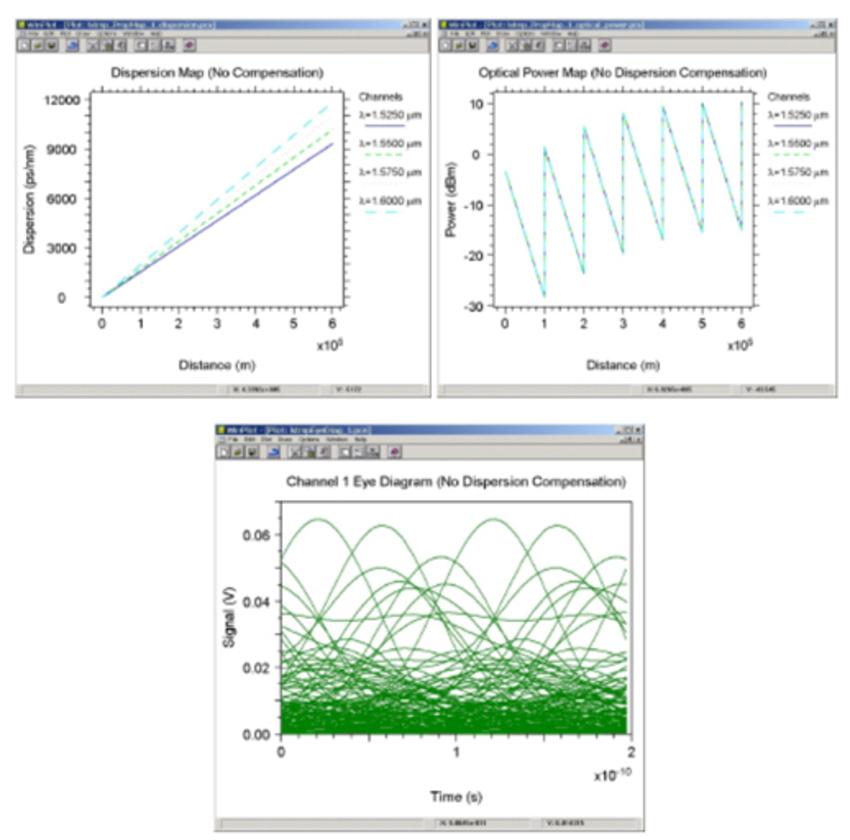 In the other hand for long length there is a difference between RZ and NRZ pulse generators as the system designed for each of them as shown below.

Two formats are included in this modulation group: Non-return-to-zero (NRZ) and Return-to-zero (RZ) .NRZ is the oldest and simplest modulation format and is obtained by switching a laser source between ON or OFF. RZ describes a line code used in telecommunications signals in which the sign drops to zero between each pulse. This takes place even if a number of consecutive “0” or “1” occurs in the signal. The signal is self-clocking. This revenue that a separate clock does not need to be sent alongside the signal, but suffers from using twice the bandwidth to accomplish the same data-rate as compared to non-return-to-zero format. Although return-to-zero (RZ) hold a provision for synchronization, it motionless has a DC component resulting in ‘baseline wander” during long strings of (o) or (1) bits, just like the line code non-return-to-zero. The RZ and NRZ data signals formats are showing in figure 1.a&b respectively [1].

Besides, for most common semiconductor photo detector is the PIN photodiode, which consists of an intrinsic semiconductor sandwiched between p-doped regions. While PIN photodiode is normally subjected to a reverse bias. In an APD the absorption of an incident photon first produces an e-h pair just like in a PIN. The large electric field in the depletion region causes the charges to accelerate rapidly [4].

The general formula for dispersion compensating is

For 280 Km transmission distance as in this system .the dispersion is as follows:

From this result we can find that the whole dispersion is not exceeding the standard value of 1.5 dBm. Which appears very interesting in transmission link[6]?

The simulation has been carried out by using opt system software version 7. In this occupation we used CW laser 1552 nm, as a lighting emission source to transmit data over 288 km length through one loop control and EDFA gain 20 dB. The systems build as figure 7. This figure shows the system design of dispersion compensation FBG by simulation software version 7.we can use this system to find the effect and calculation of dispersion compensation in fiber optics. 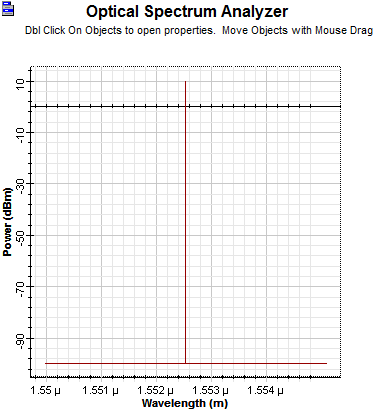 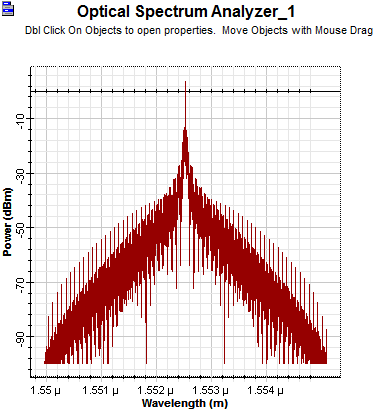 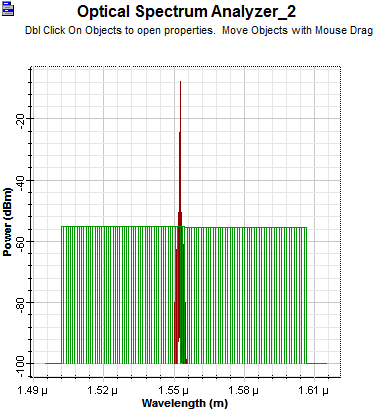 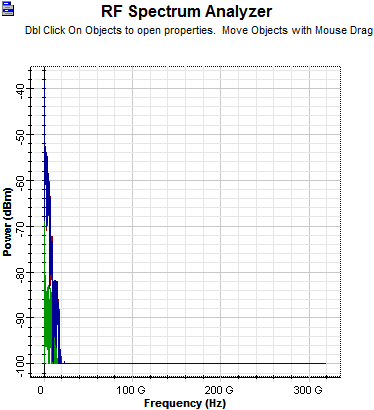 a) Spectrum signal of input power at 15.5dBm from CW laser 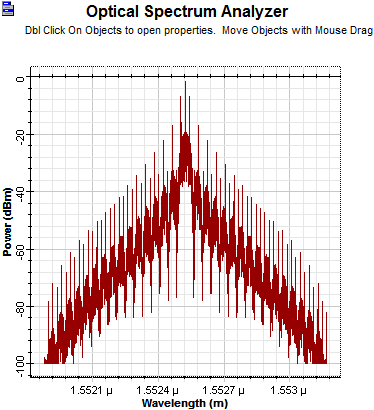 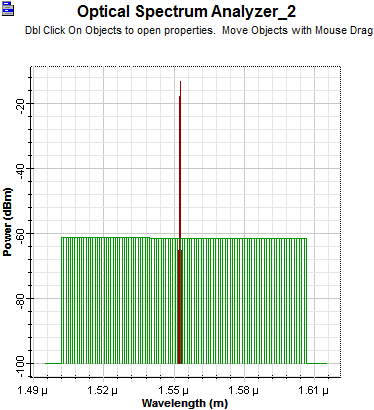 Referring to the figure 7, is the comparing between most two types of photodiodes at fixed data rate equal to 10Gb/s, with input power varying from 1 to 10 dBm ,the result illustrated that APD is high resolution effect more than that at using PIN as appeared in the values of BER which is equal to

Depending on the characteristics of the two types of photodiodes. 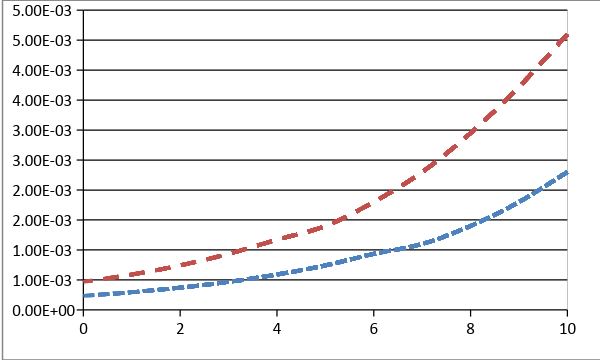 The same description for figure 8, with respect to two types of RZ and NRZ 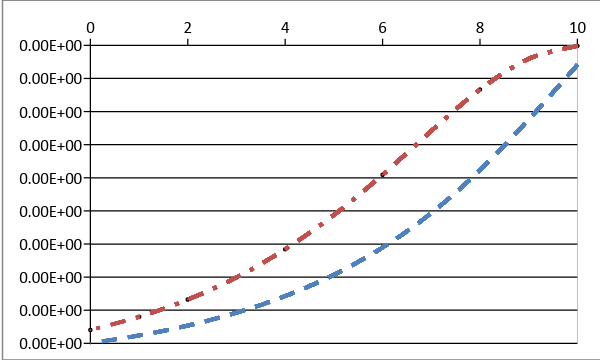 From researches  experiments of this results of BER it seems using APD  and RZ  in like this system design is very good stable in communications, which is needed . 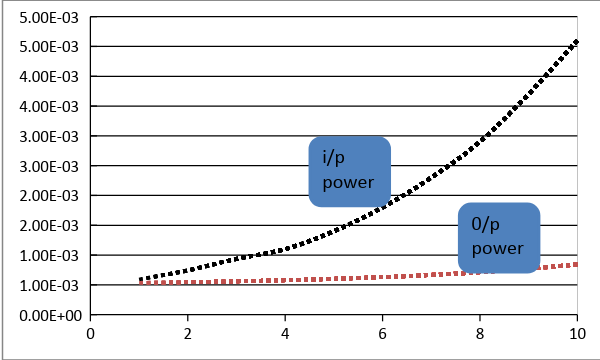 Figure 9: Relation between input power and out power 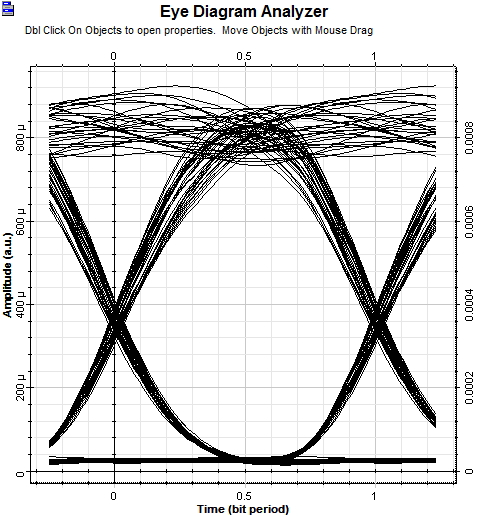 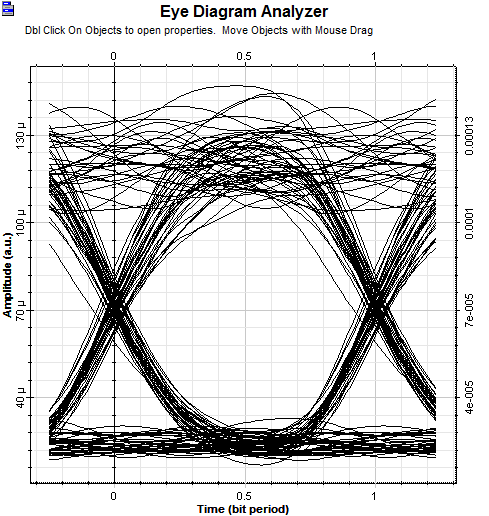 From figure 10 the eye diagram gives a quick examination of the quality of the optical signal. It's clearly depicted that the EDW code system gives a better performance, having a large eye opening. The vertical distance between the top of the eye-opening and the maximum signal level gives the degree of distortion. More the eye closers; the more difficult it is to distinguish between 1s and 0s in the signal. Hence in our results in the low data rate the eye patterns will be equal to 1.51e-121 for 10 Gpbs, while BER at high data rate will be equaled to 1.06e-19 at 10 Gpbs. Refering to the Figure 8(a) and (b ) respectively. 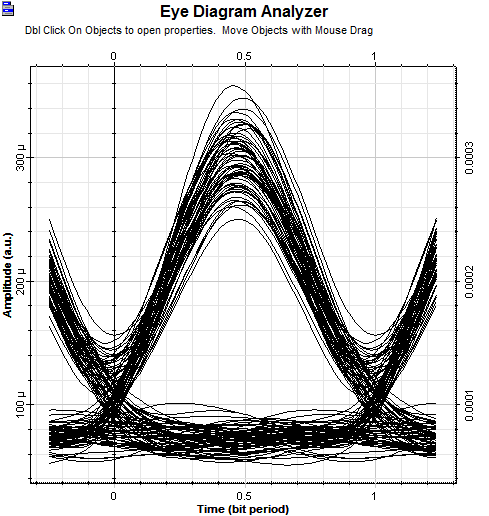 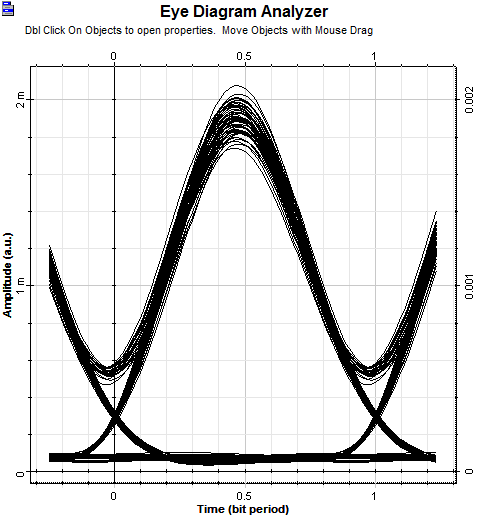 The description of figure 10 is the same illustration as for the figuer11. The Eye diagram analyze device is the best method used to check the system design’s stability.

By using different types of devices in many systems designed .it is very important thing to find which system of them is better than the other. The practical results taking directly from system designed by the help of software optisys.version 7.