The proliferation of multicore computing devices ranging from notebooks, tablets and smart phones has led to a need for load balancing to ensure optimum and full utilization of all the cores. Various algorithms exist for implementing load balancing in these multicore platforms albeit with different performance characteristics. To ensure optimum usage of all the cores, an experimental comparison of the performance of the various algorithms on real world problem domains is necessary to inform on which algorithm to use for each domain of computational problems.

The proliferation of multicore computing devices ranging from notebooks, tablets and smartphones has led to a need for load balancing to ensure optimum and full utilization of all the cores. Various algorithms exist for implementing load balancing in these multicore platforms albeit with different performance characteristics. To ensure optimum usage of all the cores, an experimental comparison of the performance of the various algorithms on real world problem domains is necessary to inform on which algorithm to use for each domain of computational problems.

With the increasing application of computers in almost all facets of human life, there has been a significant demand for high performance from the various computing platforms.

Due to this demand, the evolution of computers has been characterized by increasing processor speed, decreasing component size, increasing memory size, and increasing I/O capacity and speed [1]. One factor contributing to increases in processor speed is the shrinking size of microprocessor components which reduces the distance between components and hence increases speed [1]. However, the true gains in speed in recent years have come from the organization of the processor, including heavy use of pipelining, parallel execution techniques and the use of speculative execution techniques (tentative execution of future instructions that might be needed)[1].

To design computers that are effectively fast, performance of various components has to be balanced, so that a performance of some components is not dragged by low performance of others. Case in point, processor speeds have increased drastically than memory access. To ameliorate this mismatch, various techniques have been adopted, namely: use of caches, wide data path between memory and processor, and more intelligent memory chips [1].

Further, apart from increasing performance by considering the design of the internal computer components, other techniques have been developed, e.g. use of parallel computing, the use of a memory cache hierarchy, and speedup in memory access time and I/O transfer rate due to technology improvements.

However, this has also been limited by the nature of problems being solved as highlighted by Amdahl’s law which states that the speedup of a parallel algorithm is effectively limited by the number of operations which must be performed sequentially [1].

Due to the above limitation, Computer Scientists have always strived to increase the performance of their computer architectures. High performance may come from fast dense circuitry, packaging technology, and parallelism [3]. This research focuses on parallelism enhanced by shrewd load balancing techniques.

One of the important mechanisms for utilizing and sharing the CPUs optimally is the policy of balancing the load amongst the processors. This type of load balancing can be achieved by transferring some of the tasks from a heavily loaded processor to a lightly loaded processor [4].

A diagrammatic representation of the two parallel computing systems is as shown in figure 1 and figure 2 [5]. 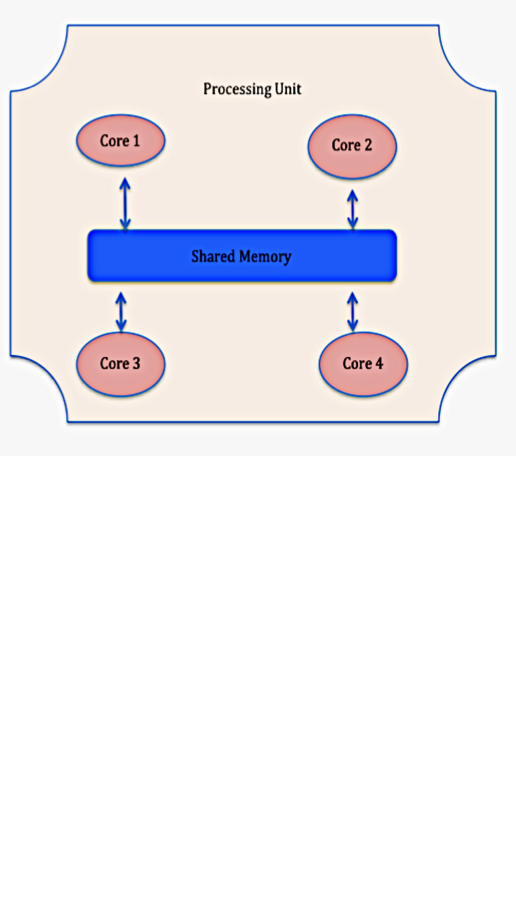 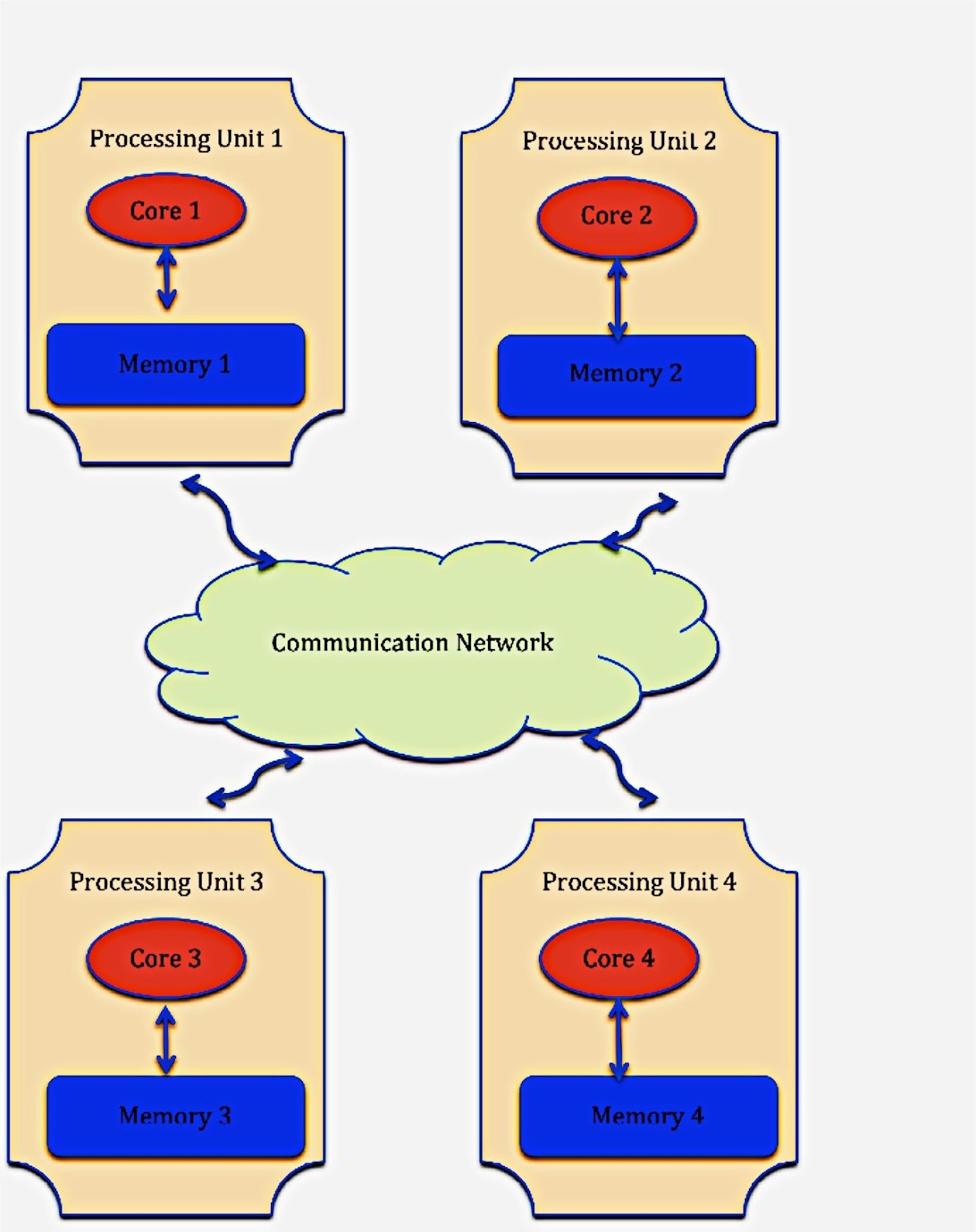 Load balancing is the process of roughly equalizing the work load among all nodes of the distributed system [6].

Comprehensively, Load balancing is the distribution and/or redistribution of processing tasks among the processing nodes of a parallel or distributed system for the purpose of improving the efficiency and effectiveness of the entire processing system.

An imbalance on today’s fastest supercomputers can force hundreds of thousands of cores to idle, and on future exascale machines this cost will increase by over a factor of a thousand [7].

Load balancing is one of the central problems which have to be solved in parallel computation [8]. Since load imbalance leads directly to processor idle times, high efficiency can only be achieved if the computational load is evenly balanced among the processors.

The load balancing problem can be  stated  as: given the initial job arrival rates at each computer in the system find an allocation of jobs among the computers so that the response time of the entire system over all jobs is minimized [9].

Whereas work has been done in analysis of the various dynamic load balancing algorithms, most emphasis has been on distributed systems and using qualitative parameters e.g. overload rejection, reliability, predictability, adaptability, scalability, stability, waiting time, throughput etc., and thus there has been little practical emphasis on shared memory parallel systems and use of quantitative parameters like execution time and processor idle times [13].

This is attributed to the fact that during the times of those researches, shared memory parallel devices were not as prevalent as they are today.

The various works that have performed a comparative study of algorithms using qualitative parameters include: [14]; [15]; [16].

In the comparison of the performance of the two dynamic load balancing algorithms, the following methodology was adopted.

In this project, the identified common problems were implemented on a shared memory system for parallel execution, using each of the identified dynamic load balancing techniques.

The identified common problems are Matrix Multiplication, Sorting and Searching.

Sorting was chosen because sorting algorithms are widely used in a broad variety of applications e.g. in commercial computing where government organizations, financial institutions, and commercial enterprises organize much of this information by sorting it [18] Further, keeping data in sorted order makes it possible to efficiently search through it.

The selection sort was chosen because it is an in-place sorting (requires no extra memory, thus ideal for small parallel systems e.g. phones and tablets where auxiliary memory is limited), and also for its simplicity in implementations.

Searching was chosen because keeping data in sorted order makes it possible to efficiently search through it. Linear search was chosen because it is extremely common in most real world applications e.g. in ruby's find_index and jQuery, further it is also the most basic search that can be found.

The experiment to compare the performance of the algorithms was designed as below:

For matrix multiplication, the following structure was used:

Then the multiplication shall be:

This results in four tasks, which are divided into chunks that are assigned to the processing entities. The experimentation was organized into chunk size 4, 8, 16 and 32.

For random number generation, part of the module code was from the code distributed under the GNU LGPL License [19].

During experimentation, the following procedures were adapted

For matrix multiplication, the sizes used were as shown in table 1. Each matrix size is run eight (8) times with results recorded for each run and averaged at the end. This is in line with [20] on secrets of successful simulation studies.

These sizes were chosen due to their ability to produce better results based on preliminary runs.

For sorting, the sort spaces used are as shown in table 2. Each sort space is run eight (8) times and results recorded for each run and averaged at the end.

For searching, the search space used is as shown in table 3 below: each is run eight (8) times and results recorded for each run an averaged.

A chunk is an ordered, fixed-sized array of fixed-sized slots [21]. In this experiment chunk size refers to the portion of the whole problem being solved that is assigned to a given core for execution. The chunk sizes used are as shown in table 4 .

The system was developed as below:

Parallelism was enabled by the directive:  # pragma omp parallel, while the timing of the processing time shall be done using: omp_get_wtime ( ) which is an OpenMP function that returns a double precision value equal to the number of seconds since the initial value of the operating system real-time clock.

The algorithm used in the experiment for matrix multiplication is as shown below: 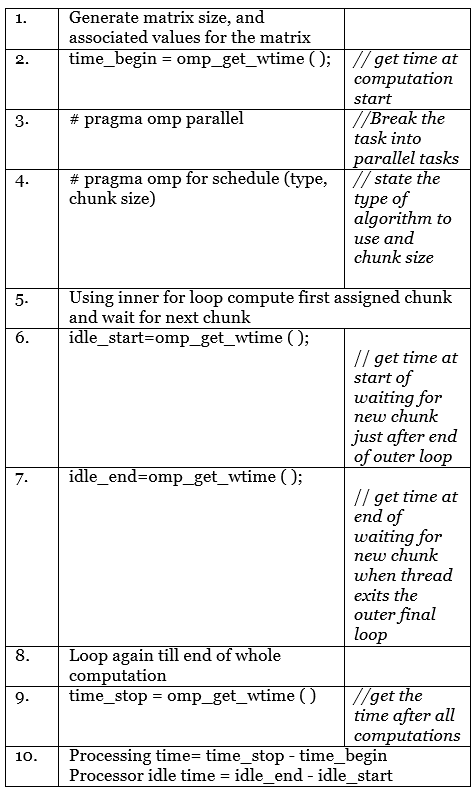 The algorithm used in the experiment for searching is as shown below: 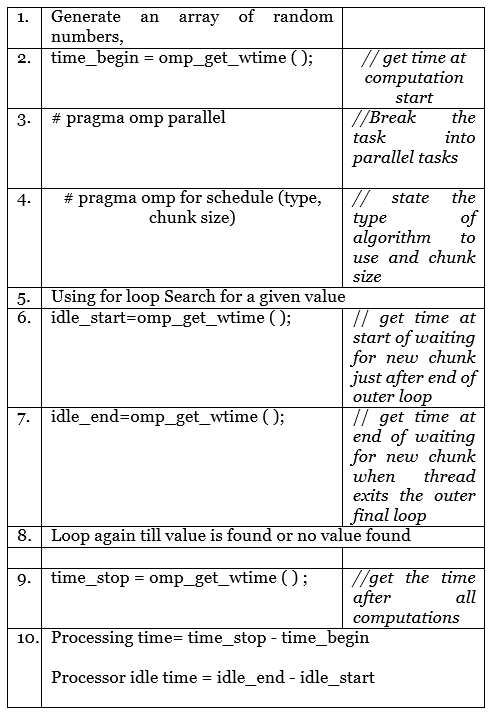 The algorithm used in the experiment for sorting is as shown below. 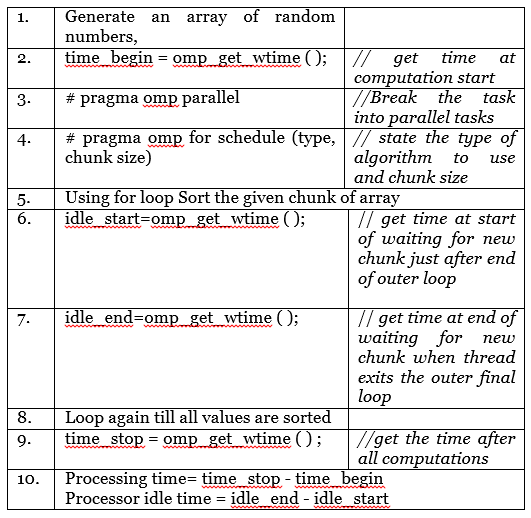 The experiment was perfomed on a computer with specifications as indicated in table 5:

From the experiments done, the results are as below: 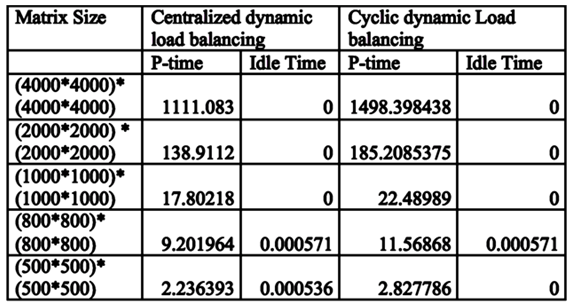 The processing time can be depicted graphically as shown in figure 3. 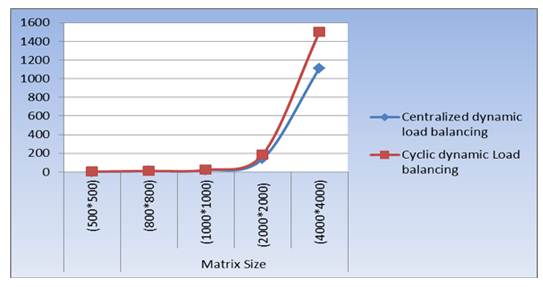 The results for the search experiment are shown in table 7.

The processing time can be depicted graphical as shown in figure 4.

From the above summaries, the cyclic dynamic load balancing performs better than the centralized dynamic on linear search.

The results for the sort experiment are as shown in table 8.

Graphically, the processing time can be presented as in figure 5. 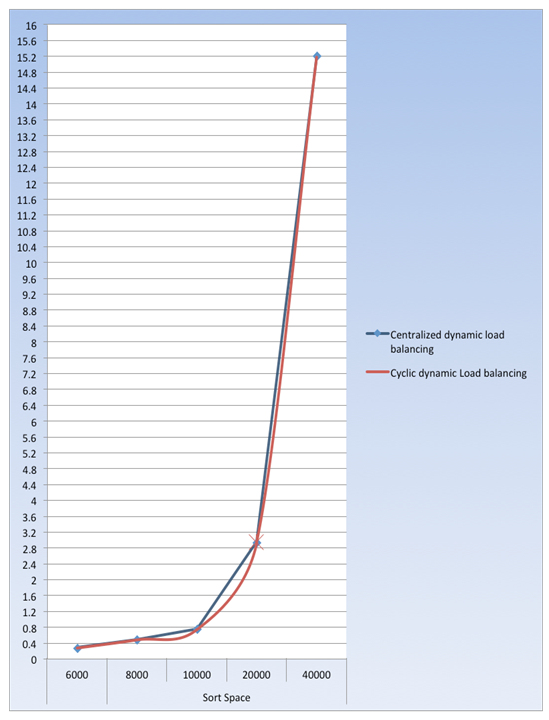 For matrix multiplication, centralized dynamic load balancing algorithm performs better than cyclic load balancing as depicted in table 6. This is because for computations, which vary in computation complexities, it is better for the core to first finish its portion of assigned work before it can assign more work upon request as opposed to continuous assignment in a cyclic way. This is to reduce unbalanced workload as much as possible.

For sorting applications, the cyclic load balancing performs better than the centralized dynamic load balancing as depicted in table 8. This is because there are no varied complexities in sorting and hence waiting for the core to finish the assigned portion of work and waiting for it to request wastes time.

From the conducted experiment, there was no substantial consistency in the observed processor idle time to warrant a conclusive analysis.

I acknowledge the assistance and guidance provided by the late Prof.Okello-Odongo, of the University of Nairobi, throughout this research before his untimely demise.