In this paper implementation, operation and design analysis of the hybrid boost DC-DC converter is described for renewable energy sources andlow voltage sources. Here the Combination of interleaved structure of inductor and voltage multiplier structure are implemented. Open loop control and closed loop fuzzy control of this converter is employed in the MATLAB SIMULINK and output voltage waveforms are shown.

In this paper implementation, operation and design analysis of the hybrid boost DC-DC converter is described for renewable energy sources and low voltage sources. Here the Combination of interleaved structure of inductor and voltage multiplier structure are implemented. Open loop control and closed loop fuzzy control of this converter is employed in the MATLAB SIMULINK and output voltage waveforms are shown.

Nowadays the renewable energy systems are expecting the generation of high voltage gain DC-DC converters with high efficiency and low cost, so DC-DC converter is good for economical point of view and reliable to loads. The front end PV system generally requires and wants the step-up (boost) converter which has the characteristics of boosting the voltage with good regulation capability. PV system and renewable energy sources have low and variable terminal voltages, So DC-DC converter is placed between PV systems or renewable energy sources with HVDC (high voltage DC) applications [1]. Fuel cell energy system also requires high gain DC-DC converter because it has low voltage at output side (storage side). Actually, conventional DC converters can offer limited gain and their efficiency reduces as the gain requirement increases. Switched capacitor structure, tapped or coupled inductor based technique, transformer based techniques, voltage multiplier structures are implemented in recent years. So each method has its own advantages and limitations. Switched capacitor DC-DC power converters are used a network of switches and capacitors. This switched capacitor converters are ideal for power electronic applications [2]. It enables high efficiency and it can be used in number of applications in the power conversion space. But it has poor regulation capability and high pulsating current. The DC-DC boost converter is used to convert the unregulated DC input to a controlled DC output at a desired voltage level. They generally perform by applying a DC voltage across an inductor or transformer a period of time usually in the range of 20KHZ to 5MHZ [3]. It can store the energy in magnetic form and transferred across the output side in a controlled manner. So, it can be used in vehicles, solar powered uninterrupted power supplies and significant use in renewable energy sources. But it gives more circuit complexity and requires snubber circuit [4]. So high boost DC-DC converter with hybrid transformer method is presented to achieve high output voltage with high efficiency. The boost DC-DC converters have been proposed to obtain high voltage without extreme high duty cycle by using isolated transformer or coupled inductor which are discussed previously. The design of the high efficiency transformers, coupled inductors or resonant components for these converters are relatively complex, compared with the proposed boost DC-DC converter [5]. By cascading diode-capacitor or diode-inductor modules, these kinds of DC-DC converters provide not only high voltage gain but also simple and robust structure. The proposed Cockcroft Walton voltage multiplier is very popular among high voltage than that of the conventional Cockcroft Walton voltage multiplier [6]. The problems in previous methods are poor regulation capability, switching losses, less voltage gain, poor efficiency, more voltage ripple, less voltage gain, more component stress and circuit complexity [7]. So, the design of boost DC-DC converter will make according to their application. In this paper, the new hybrid boost converter with single switch and single inductor is proposed by employing the bipolar voltage multiplier with interleaved structure to get the high voltage gain and efficiency.

In further chapter, design and explanation of DC-DC boost converters are explained.

a) Inductive core switching:  The combination of input source voltage, inductor and MOSFET switch perform as a main role. The inductive core switching is shown in fig: 2. It can give two opposite or relative PWM voltages at port AO and port OB. Although the two voltage waveforms have their individual high voltage level and low voltage level then the gap between two levels is similar to each other [9]. The purpose of MOSFET switch is used in this converter to maintain less switching losses[10]. This Switch is changing the duty ratio according to Ton, T off. 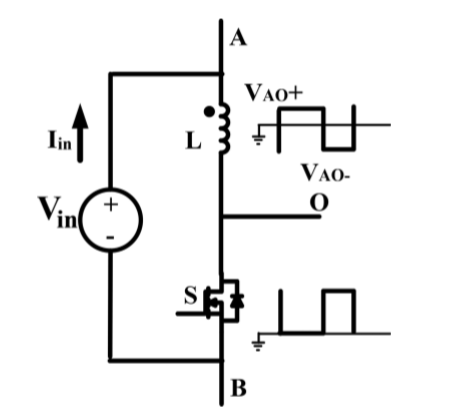 b) Interleaved structure: Nowadays the interlaced high boost DC-DC converter has been widely used in photo voltaic generators, electric vehicles and power factor correction due to its high power density [12]. Interlaced connection is a method in which the additional circuit is added in between the input and output of the main circuit in order to achieve high efficiency and output voltage of the converter [11]. Interlaced parallel structure has been applied in many high power density applications, in order to minimize the input current ripple, reduce the circuit size, and improve the power level. This interleaved structure of hybrid boost converter consists of two boosting sections to achieve high gain without extreme duty ratio [13]. 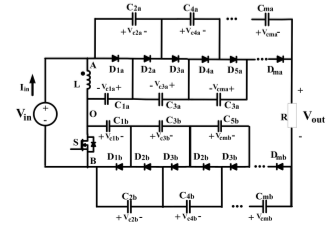 Explanation of MOSFET switch is in on position:

In this mode, the total input voltage applied to the inductor terminal A and O nodes. Then this voltage appears across the output terminal including charging and discharging operation of capacitors and conducting of diodes takes place. So voltage across O and B points are to be zero and resistance of MOSFET is considered as negligible. At this mode, capacitor C2a is discharged.

Explanation of MOSFET Switch is in off position:

Continuous and discontinuous modes: According to previous mode C2a will be charging from inductor L in reverse direction, C2b will be discharging through L. When the inductive current is discharging as the switch is in turned off position, then the current doesn’t touch to zero then it is called as continuous conduction mode.

Fig. 4: Analysis of Switch on position of MOSFET.

Fig. 5: Analysis of Switch off position of MOSFET.

In the discontinuous conduction mode, the current of inductor touches to zero, basically it is taken as a discrete system.

Calculation of capacitors involved in this circuit

In next section closed loop fuzzy logic control of hybrid boost converter circuit is implemented in MATLAB simulation to control the output voltage.

Fuzzy logic control is automatic control technique it is closed loop control of any system. This is dealing with analog inputs like ‘0’ and ‘1’ and explains the rules, instructions by taking if and then sentences. In an electrical system, so many machines are controlled by this closed loop technique, because it gives controlled output and reliability of the machine. Rules are implemented to perform the operation and gives controlled output signal. Each variable consists of 7 membership functions along with OR, AND operations. NB=Negative B, NM=Negative medium, NS=Negative small, ZE=Zero, PS=Positive small, PM=Positive medium, PB=Positive B are compared according to 49 rule based fuzzy logic controller [16]. 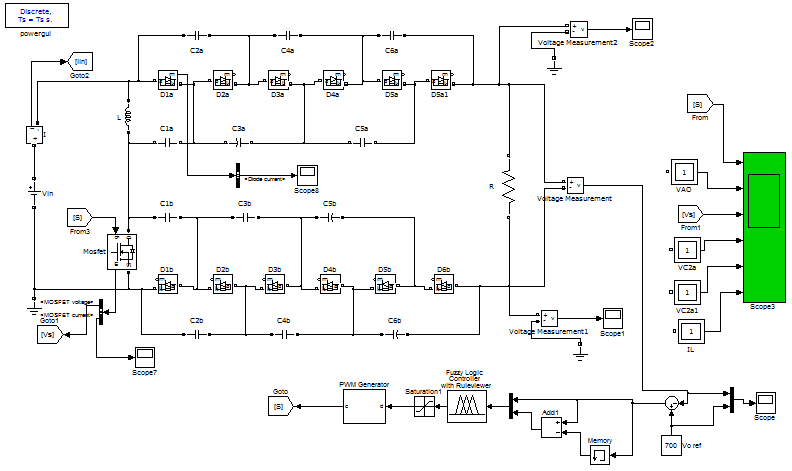 This control technique is connected to the output side with closed loop control parameters. Those are to be constructed by MATLAB SIMULINK. This is dealing with analog inputs like ‘0’ and ‘1’ and explains the rules, instructions by taking if and then sentences. In an electrical system, so many machines are controlled by this closed loop technique, because it gives controlled output and gives reliability of the machine. In next section, switching losses and efficiency and simulation results are shown.

Here I = 7A is taken from output waveform.

By observing above losses, the proposed method is advantage for further application. And remaining all components have passive nature so no losses are represented. So, diode and MOSFET losses are taken as consideration.

So according to this, high efficiency is obtained. Simulation waveforms of hybrid boost converter with and without fuzzy logic controller is described as follows. 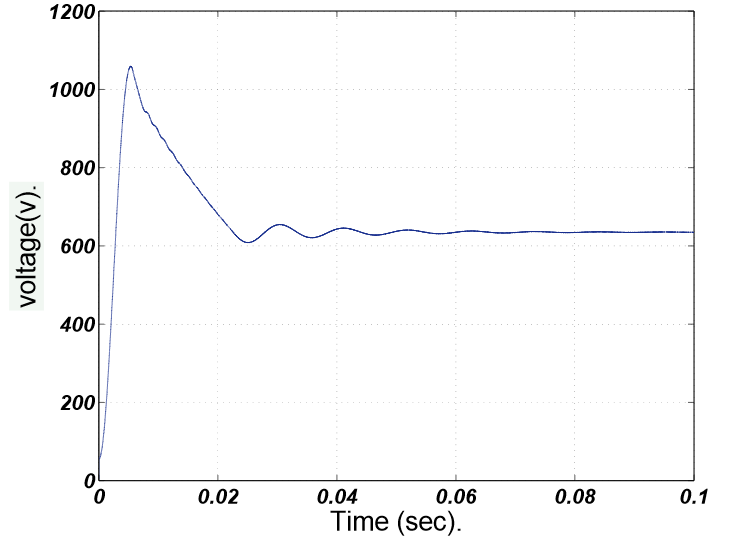 The above result is plotted between output voltage and time. The settling time is 0.02sec to reach steady state value. The maximum peak overshoot value of this plot is 1090V before reached steady state. 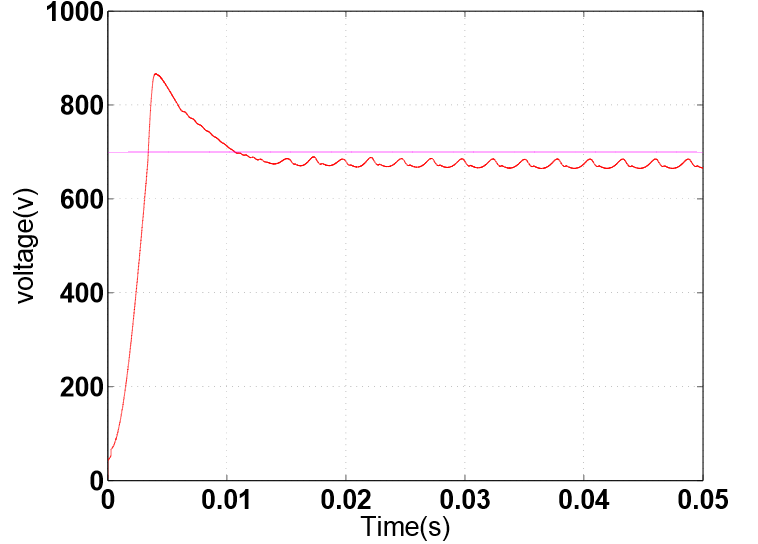 The above result is plotted between output voltage and time. The settling time is 0.01sec to reach steady state value. The maximum peak overshoot value of this plot is 890V before reached steady state.

Table 3: Results comparison of hybrid boost converter according without and with fuzzy logic control.

Power and efficiency values are compared in below fig: 9, fig: 10 with and without controller.