Due to unique characteristics and permanence of fingerprints, Fingerprint Recognition (FPR) Systems has been extensively employed in security, identification, and verification of a person in forensic and commercial applications. External attacks or spoofing attacks are among the main challenges in using FPR systems. Spoofing means to make the system fool by producing fake finger as a real one to the fingerprint sensor. So, there is a need to develop efficient techniques to distinguish between fake and real fingers against these attacks, so that FPR systems can be secured. These types of attacks can be identified by measuring life signs and live detection techniques together with FPR techniques. This paper presents a brief review of work carried out in the field of live detection in FPR systems with various spoofing and anti-spoofing techniques. To make FPR systems more reliable, secure & efficient, it is necessary to detect and protect the system against any unpredictable spoofing attacks.

Due to unique characteristics and permanence of fingerprints, Fingerprint Recognition (FPR) Systems has been extensively employed in security, identification, and verification of a person in forensic and commercial applications. External attacks or spoofing attacks are among the main challenges in using FPR systems. Spoofing means to make the system fool by producing fake finger as a real one to the fingerprint sensor. So, there is a need to develop efficient techniques to distinguish between fake and real fingers against these attacks, so that FPR systems can be secured. These types of attacks can be identified by measuring life signs and live detection techniques together with FPR techniques. This paper presents a brief review of work carried out in the field of live detection in FPR systems with various spoofing and anti-spoofing techniques. To make FPR systems more reliable, secure & efficient, it is necessary to detect and protect the system against any unpredictable spoofing attacks.

In the present scenario there are various applications in which protection of sensitive data, services or facilities from illegal access is required this is usually achieved by some type of security means like password, card, key, PIN (Personal Identification Number) and biometric identification. The objective of using any one of these security means that the system is accessed by an only legal person or user [1]. The password, card, key, and PIN can protect the system against fraudulent access, but they can be cracked or guessed by hackers. Sometimes the single password or PIN is employed for access to multiple resources. If one can crack or guess that password or PIN, then all the resources can be easily accessed by an unauthorized person. Thus there is a necessity of more secure and reliable techniques to protect resources from fraudulent access.

To overcome the limitations of these recognition techniques means Biometrics Recognition (BMR) System started to find applications in security systems [2]. BMR systems use human characteristics for authentication purpose to the system and they can’t be stolen easily and don’t require any password to remember by the user. Biometric systems work on the human unique characteristics that are a fingerprint, voice, palm geometry, face, signature, and iris etc [3-6].

Fingerprint Recognition (FPR) systems are preferred over all the BMR systems used for authentication in personal and commercial applications due to their reliability and uniqueness in nature. Though the biometrics information can’t be easily stolen, forget or lost; but due to advancement in technology one can access the system by fake identity made from a real one using various methods. BMR systems are more accurate and secure than all traditional security methods but also have various vulnerabilities that make the system less secure [7-8].

Biometrics systems are affected by various types of attacks at different levels. These attacks may be at the sensor level, replay attack, feature level, tempering stored template, matching process & matching score level, attacking the channel at a different level and overriding the final decision etc. [9]. Among all the vulnerabilities, spoofing or direct attacks have been considering for the present study. These types of attacks are also known as presentation attacks because in these attacks a fake identity of the genuine user is presented to the sensor for accessing the system. This paper focuses on the sensor level attacks, which affect the system easily without knowing the internal structure of the system.

These attacks are done by presenting fake fingerprints to the sensor for authentication purposes. An unauthorized person uses fake fingerprints are made from the impression of a real finger on artificial materials such as plastic, clay, play-doh, putty, paraffin wax, silicon, and gelatin material to access the system with this fake fingerprint. To avoid these types of attacks and to ensure right person at a right place one needs to use live detection techniques in the FPR system [10]. In this study, consideration of the different types of sensor level spoofing attacks and their detection techniques have been discussed and compared. In section II brief study about various types of attacks are discussed. Section III depicts different live detection techniques. Section IV gives a comparative study of work carried out by researchers in this area. In section V the study has been concluded.

Researchers have shown that one can easily spoof the FPR system [11], which means a false acceptance of user by using fake evidence to the FPR or biometric system. By spoofing the FPR system an unauthorized person can access the system and manipulate the data or information without knowing to an authorized user. One can manipulate the data or information in FPR system by two form of attacks as shown in fig.1 [12]. Direct attacks are performed at first stage of FPR system i.e. at sensor by making a fake finger from real one and these attacks are also known as spoofing or presentation attacks. Hence these are found outside the digital limit of FPR systems. In indirect attacks manipulation of digital information i.e. features, database, channel & score etc. is done at various stages of FPR system by the specialized hackers to illegally access the system. 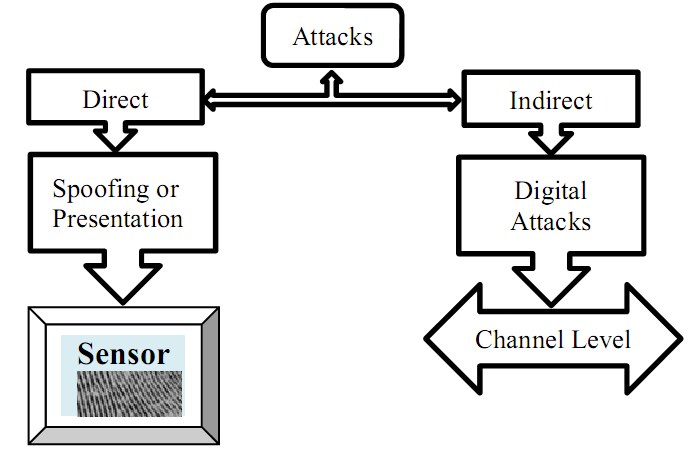 Spoofing attacks are more popular because there is no need of any technical knowledge about the internal structure of the FPR system. These attacks are performed by making an artificial mold or fake finger of a real finger with cooperation or without the cooperation of user. There are two categories by which fake fingerprints are created [13]:

The main attention is carried on fake finger attacks. These attacks have been implemented by employing fake finger to the sensor made from an impression of real one. There are several categories from which fake fingerprint can be produced. Various materials incorporated for fake fingerprint are plastic print, clay print, Play-Doh print, silicon mold, gelatin material, print photo, ink print and mikrosil mold etc. According to the input data, there is various process by which fake fingerprints are created as shown in fig.2. 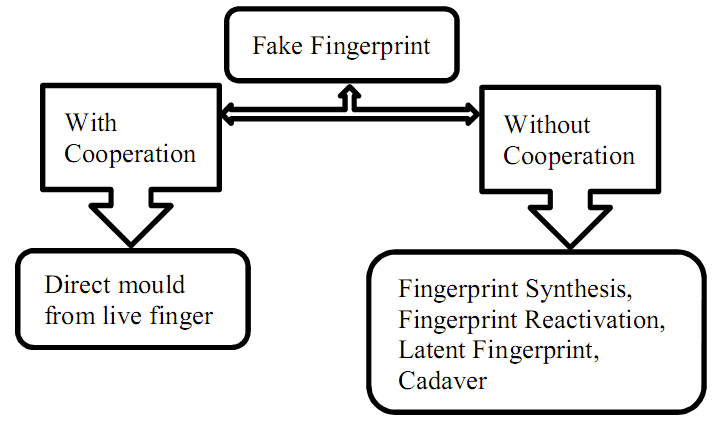 In fig. 3 basic block diagram of FPR system is shown with different types of attacks at different stages/level by which one can affect the system or spoofing the system with a fake identity. 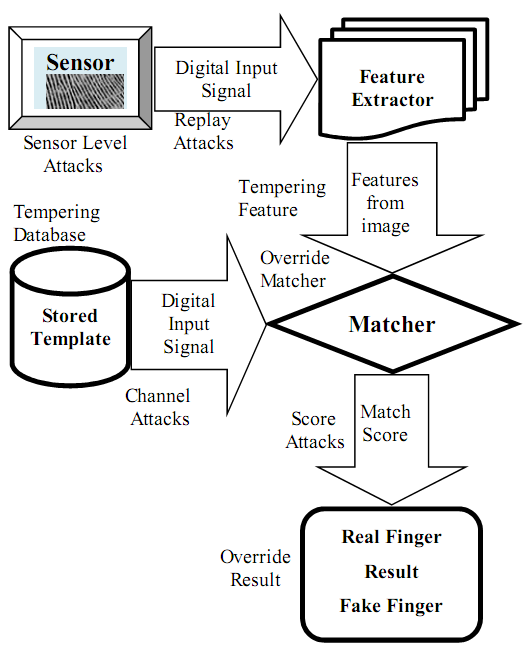 Based on the literature survey any person can generate a fake fingerprint and easily spoof the FPR system. Thus, to avoid spoofing attacks, live detection techniques must be incorporated into the system [14-17].

Table 2 shows the various spoofing detection methods used for distinguishes between real and fake fingerprint based on the extracted feature from the input.

These features are extracted from real and fake finger based on predefined attributes. A classifier is learned based on the training set. These methods give the output in the form of numerical values and depend on these values, classifier authenticates the input as real or fake [18].

Table 2: Spoofing detection methods based on the attributes and features extracted from the fingerprint [23-36]. 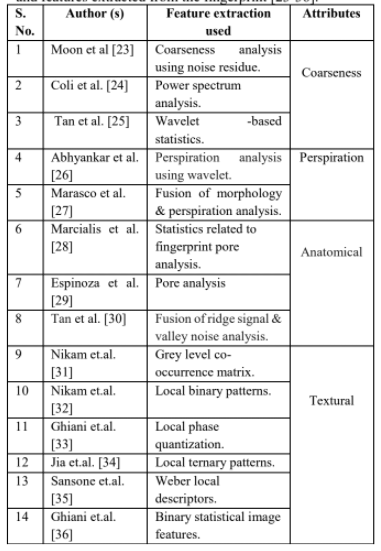 In table 2 four attributes coarseness, perspiration, anatomical and textural are considered for detection of spoofing attacks. Serial no. 1to 3 is based on coarseness attribute with different feature extraction methods to detect input attacks in FPR system. In serial no. 4 to 5 perspiration analysis is done using wavelet and fusion of morphology on the input image to find the real and fake finger. In serial no. 6 to 8 pore and noise analysis are considered under anatomical attributes based on that system detect input finger is real or fake. At last textural attributes with feature extraction is used to detect spoofing attacks.

In recent years software-based approaches gain more attention due to various types of algorithms that can be applied to detect spoofing attacks. Existing FPR systems can be easily protected by simply upgrade the system with a new algorithm. Thus, by applying software-based techniques existing FPR systems are protected. These solutions are easy to use, fast, less costly, easily upgradeable, and more efficient.

Table 3(a): Comparative study based on classification rate

Table 3(b): Comparative study based on accuracy and error

Recently the demand for biometrics systems has been increased for security and authentication purposes due to their unique characteristics. Among all biometrics, human fingerprints are most reliable and employed in large-scale applications. Biometrics systems are sometimes influenced by various attacks such as spoofing attacks. In last few years these types of attacks have become a challenge to the use of biometric systems. Hence researchers gave more attention to detect these types of attacks, that is to develop techniques to differentiate between fake and real finger and ensure the genuine user for the system. In this paper, an overview of various types of spoofing attacks and live detection techniques proposed by different researchers have been discussed. There is need to develop generalized live detection algorithm for unpredictable and unseen spoofing attacks. One way to predict or detect these types of attacks in FPR systems is to add more features to the system for recognition, so the system becomes more secure and efficient.