A simple, accurate and rapid high performance liquid chromatographic method has been developed and applied for determination of clorazepate dipotassium in capsules. Rosuvastatin calcium was used as internal standard. The determination was performed on Supelcosil C8 DB column (250×4.6mm i.d., 5µm particle size) at 25 °C using a mobile phase composed of MeOH and 0.1 M HCOOH pH 2.16 (67:33, v/v), pumped at a flow rate 1.0 mL min-1. The photodiode array detector was operated at 245 nm. The retention times for rosuvastatin and clorazepate were about 5.05 and 6.85 min, respectively. Results of assay were statistically evaluated for its accuracy and precision. Linearity range was 2.15–400.0 µg mL-1. The limits of quantification and detection were 1.31 and 0.39 µg mL-1, respectively. The intra-day precision results, expressed by relative standard deviation values, were lower than 2.35%. The validated method has been successfully applied to the analysis of clorazepate dipotassium in capsules with no interference from the excipients.

A simple, accurate and rapid high performance liquid chromatographic method has been developed and applied for the determination of clorazepate dipotassium in capsules. Rosuvastatin calcium was used as internal standard. The determination was performed on Supelcosil C8 DB column (250×4.6mm i.d., 5μm particle size) at 25 °C using a mobile phase composed of MeOH and 0.1 M HCOOH pH 2.16 (67:33, v/v), pumped at a flow rate 1.0 mL min−1. The photodiode array detector was operated at 245 nm. The retention times for rosuvastatin and clorazepate were about 5.05 and 6.85 min, respectively. Results of the assay were statistically evaluated for its accuracy and precision. Linearity range was 2.15–400.0 µg mL-1. The limits of quantification and detection were 1.31 and 0.39 µg mL-1, respectively. The intra-day precision results, expressed by relative standard deviation values, were lower than 2.35%. The validated method has been successfully applied to the analysis of clorazepate dipotassium in capsules with no interference from the excipients.

The objective of this work was to develop an analytical HPLC procedure, which would serve as a reliable and rapid method for the determination of clorazepate dipotassium in pharmaceutical preparations. This manuscript describes the development and subsequent validation of isocratic reversed-phase HPLC method using the C8 column as a stationary phase for the above determination. In the proposed LC method, clorazepate dipotassium and rosuvastatin calcium (internal standard) were well separated and eluted before 8 min run time. The precision of the described method for the assay of clorazepate dipotassium has been checked regarding F-test using a reported method as reference. The method serves as an alternative to the methods described in pharmacopoeias.

Supelcosil C8 DB column (250×4.6 mm, 5 μm particle size, Macherey-Nagel Germany) was used to achieve the separation. The mobile phase was a mixture of methanol and 0.1 M formic acid (67:33, v/v), filtered through a nylon 0.45 μm membrane filter and degassed by ultrasonic agitation before use. The mobile phase was prepared weekly and has a flow rate of 1.0 mL/min. The injection volume was 10 μL with ambient column oven temperature. Isocratic elution of all analytes was monitored at 245 nm.

Figure 1:  Chemical structure of (a) clorazepate dipotassium and (b) rosuvastatin calcium.

The entire content of twenty capsules containing CLZ was  weighed and mixed well. Five accurately weighed quantities of the powder equivalent to 50 mg of CLZ were transferred into 100 mL separated volumetric flasks. 70 mL of methanol was then added to each flask and the mixture was sonicated for 5 min. Then, the volume was adjusted to 100mL with methanol. The sample solutions were centrifuged for 10 min and filtered through a millipore filter (0.45 µm). An aliquot (500 µL) from the supernatants was transferred into 10 mL calibrated flasks, 1 mL RSV solution was added and the solutions were diluted with methanol to give a final concentration of about 25 µg mL-1 of CLZ and 50 µg mL-1. Finally, 10 μL of each diluted sample was injected into the column and chromatogram was recorded for the same. Peak area ratios of CLZ to that of RSV were then measured for the determination.CLZ concentration in the samples was then calculated using peak data and standard curves.

A series working standard solutions of CLZ (2.15–400 µg mL-1) were prepared by diluting the stock standard solution with the methanol. In each sample 1 mL of RSV was added (50 µg mL-1 in the final volume). To construct the calibration curve five replicates (10 µL) of each standard solution were injected immediately after preparation into the column and the peak area of the chromatograms was measured. Then, the mean peak area ratio of CLZ to that of RSV (IS) was plotted against the corresponding concentration of CLZ to obtain the calibration graph.

The sensitivity of the method was determined on LOD and LOQ. The limit of detection (LOD) and limit of quantification (LOQ) of the CLZ assay were determined experimentally by calibration curve method. LOD was expressed as the concentration of drug that generated a response to three times of the signal-to-noise (S/N) ratio, and LOQ was 10 times of the S/N ratio, thus, were calculation by using the following equations [16]:

The intraday precision was determined by measuring CLZ samples of 2.15–400 μg mL-1 injected five times on the same day. The relative standard deviation (RSD) of the assay values was calculated.

Recovery studies were performed in view to justify the accuracy of the proposed method. Precision was calculated from percentage relative standard deviation (RSD %) for repeated measurements, whereas accuracy was expressed as % of recovery.

Robustness of HPLC method was determined by deliberately varying certain parameters like flow rate, the percentage of organic solvent in the mobile phase, pH of mobile phase and the detection wavelength. When the effect altering one set of conditions was tested, the other conditions were held constant at optimum values. The robustness of the method was studied by using five replicates at a CLZ concentration level of 100 μg mL-1.

The system suitability test was performed to confirm that the LC system to be used was suitable for intended application. A standard solution containing 25 μg mL-1 of CLZ in the presence of 500 μg mL-1 of internal standard were injected seven times. The parameters peak area, retention time, resolution, capacity factor, theoretical plates, tailing factor (peak symmetry) and % RSD were determined.

RSV was used as internal standard, to improve the analytical performance and thus control undetermined changes in active pharmaceutical ingredient concentration and instrument response fluctuations, and also to reduce the problem of the many-fold dilution required in the classical batch procedures.

The effect of pH in the chromatographic elution of the compounds was also investigated by change the concentration values of the aqueous component of the mobile phase from 0.03 to 0.15 M. A satisfactory separation and peak asymmetry for the drug was obtained with mobile phase consisting of methanol: 0.1M formic acid pH 2.16 (67:33, v/v), pumped at a flow rate 1.0 mL min-1 (Figure 2b) at 25 oC.

The use of isocratic elution was proven to be short retention time for the CLZ peak and helped in the separation of RSV and CLZ. Figure 3 shows a typical chromatogram obtained by the proposed RP-HPLC method, demonstrating the resolution of the symmetrical peaks corresponding to RSV and CLZ with a flow rate of 1.0 mL/min. The retention time of RSV and CLZ was about 5.023 and 6.853 min, respectively. The retention time observed allows a fast determination of the drug, which is suitable for QC laboratories. Quantitation was achieved with UV detection at 245 nm based on peak area. 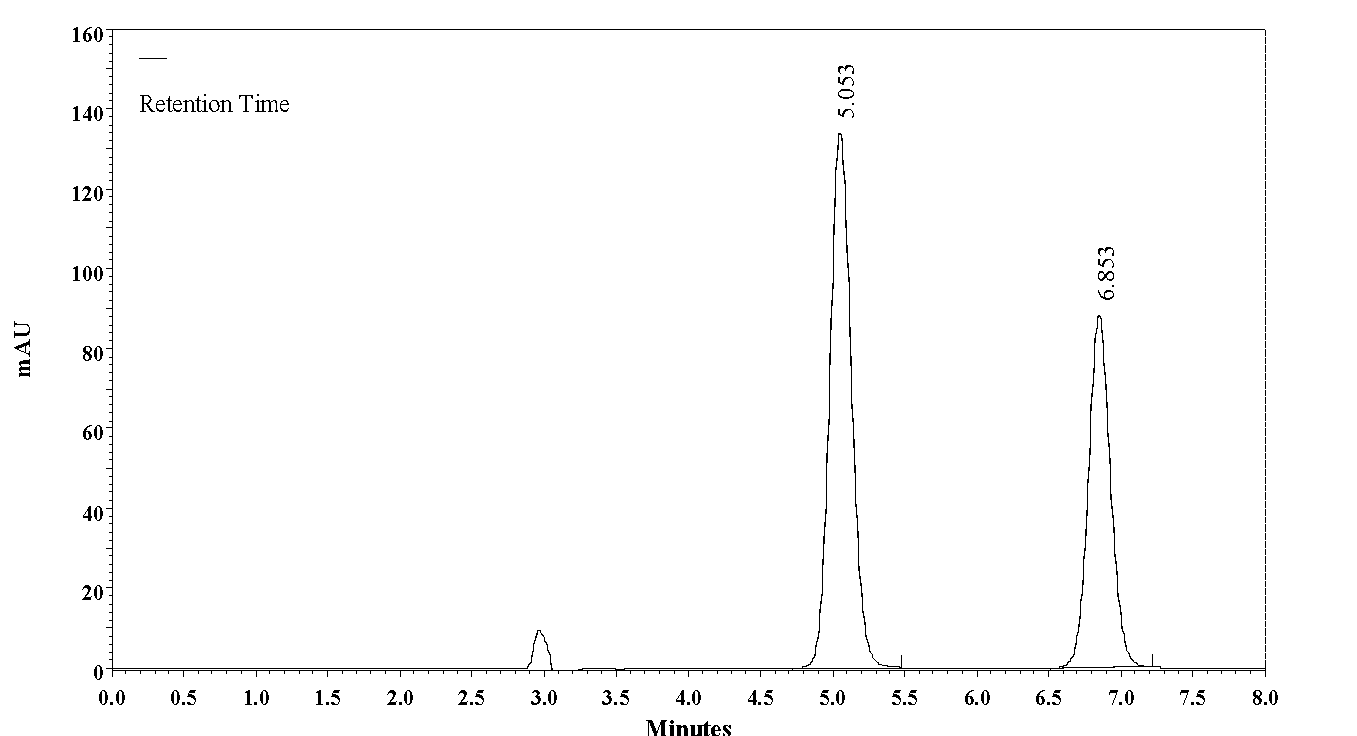 The method was validated in accordance with the International Conference on Harmonization (ICH) guidelines [17]. The following validation characteristics were addressed:

The system suitability was determined by making six replicate injections and analyzing each solute for their peak area, resolution and peak tailing factor. The system suitability requirements for 25 μg mL-1 of CLZ in the presence of 50 μg mL-1 of internal standard was a %RSD for peak area less than 0.38, a peak tailing factor less than 1.1 and Rs greater than 6.0 between adjacent peaks for all analytes. This method met these requirements. The results are shown in Table 1.

The specificity of the method was established through the study of resolution factor of drug peaks from nearest resolving peak and also among all other peaks. The specificity of the chromatographic method was determined to ensure separation of CLZ and the internal standard as illustrated in Figure 3 where complete separation of RSV and CLZ was noticed. The HPLC chromatogram recorded for the analyte in capsules (Figure 4) showed almost no peaks within a retention time range of 8 min. The Figures show that CLZ are clearly separated and the peak of analyte was pure and excipients in the formulation did not interfere the analyte. Thus, the HPLC method presented in this study is selective for CLZ.

Limit of detection and limit of quantification

The limit of detection (LOD) and limit of quantification (LOQ) were determined experimentally. LOD was found to be 0.39 μg mL−1 and LOQ was 1.31 μg mL−1 for CLZ showed a good sensitivity of the proposed method.

Table 2: Calibration data for the estimation of CLZ by HPLC.

The precision and accuracy of the method were determined by analysis of seven samples for the drug. The proposed method was successfully applied for the analysis of the drug by intra-day (analysis of standard solutions of CLZ in replicates of five in the same day) and the recovery experiments were carried out by spiking the already analyzed samples with seven different concentrations of standard CLZ. The percent recoveries obtained were from 99.17 to 100.07%. The standard deviation, relative standard deviation and relative error % of different amounts tested were determined from the calibration curve. Acceptable repeatability of the results within one day was observed. The accuracy of the method is indicated by the excellent recovery and the precision is supported by the low relative standard deviation, as recorded in Table 3.

Table 3:  Accuracy and precision of the determination of CLZ by HPLC.

The robustness of an analytical procedure is a measure of its capacity to remain unaffected by small, but deliberate variations in method parameters and provides an indication of its reliability during normal usage. These HPLC condition changes included the concentration of the aqueous component in the mobile phase, the flow rate and the percentage of methanol in the mobile phase. The robustness of the method was studied by using five replicates at a CLZ concentration level of 25 µg mL-1. The degree of reproducibility of the results obtained as a result of small deliberate variations in the method parameters has proven that the method is robust (Table 4).

4.3.  Application of the Assay

The validity of the proposed method for the determination of clorazepate dipotassium was assessed by measuring drug concentration of pharmaceutical dosage forms (Figure 4). The results obtained with the proposed method were compared with the official method [1] and are shown in Table 5. Mean values were obtained with a Student's t- and F-tests at 95% confidence limits for four degrees of freedom. The results showed comparable accuracy (t-test) and precision (F-test), since the calculated values of t- and F-tests were less than the theoretical data. The proposed method is simple, rapid, accurate, highly sensitive and suitable for the routine quality control without interference from the excipients and additives. 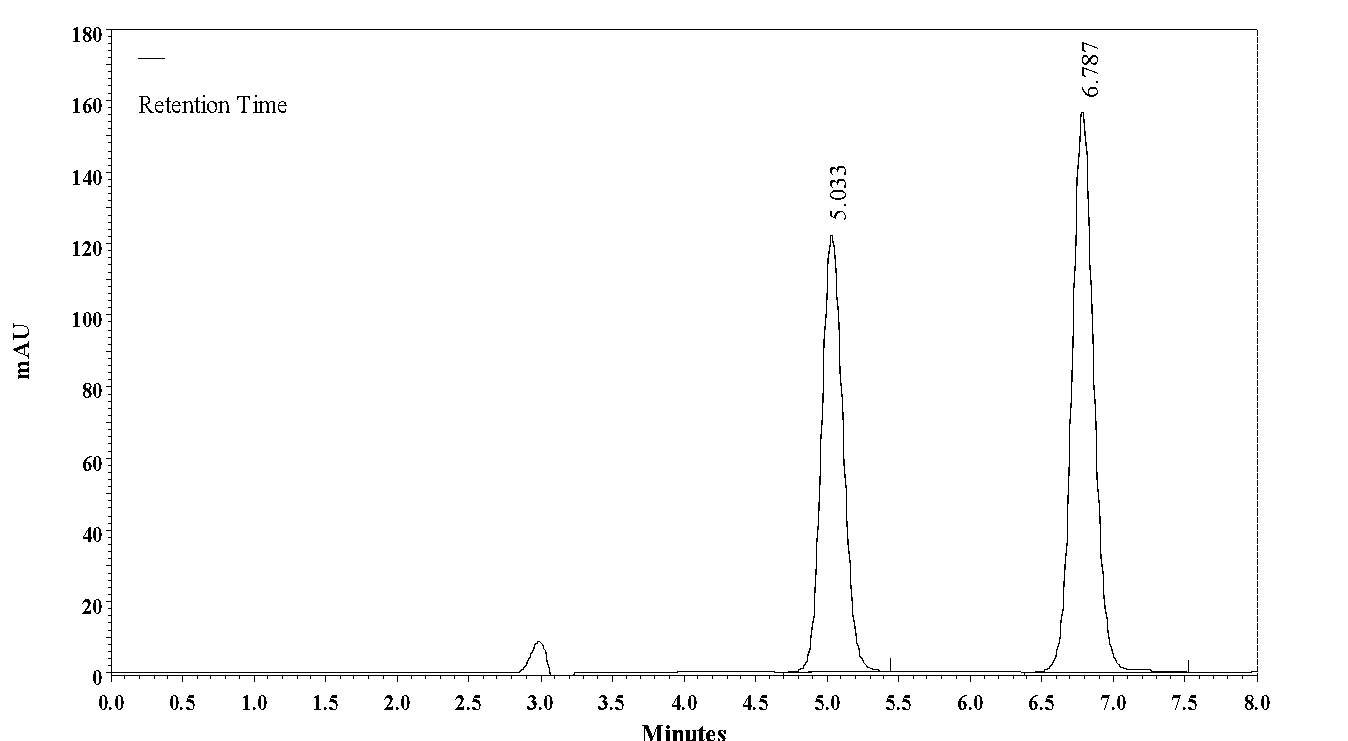 Table 5: Determination of CLZ in capsules by the proposed and official methods.

The proposed method for analysis of clorazepate dipotassium in bulk powder and in capsule dosage form based on the use of liquid chromatography with spectrophotometric detection resulted to be simple, accurate and precise. Moreover, the method is fast and feasible. Our method shows satisfactory sensitivity having LOQ 1.31 µg mL-1 and LOD 0.39 µg mL-1. The developed method showed no interference with the formulation excipients. Hence this method can be conveniently used for routine quality control analysis of dipotassium clorazepate in its pharmaceutical formulation.