Sol-gel dip coating was used to obtain undoped and Fe doped TiO2 thin films deposited on ITO (Indium tin oxide) coated glass substrate. These films were sintered at 500 οC for 1 hour. The particle size decreases with an increase in Fe concentration. The electrical properties were analyzed by Electrometer in the voltage range -30V to +30V. We examined the various conduction mechanisms i.e. Schottky mechanism, Poole-Frenkel mechanism, ohmic and space charge limited current mechanism etc. The dominant conduction mechanism is space charge and Pool-Frenkel conduction mechanism. These conduction mechanisms depend upon the deposition parameters like sintering temperature, nature of substrate, the thickness of films, and amount of dopant.

TiO2 is a material which has a wide range of applications such as self -cleaning of glasses, dye-sensitized solar cells, miniaturization of IC’s, degradation of hazardous materials in the environment. These applications depend upon the various properties of TiO2 such as structural, photo catalytic, optical, electrical, and dielectric.

TiO2 is electrically insulating with an extremely high resistivity above 108 ohm-cm but the sub oxidized TiO2 with an excess of titanium is an n-type semiconductor with unique properties indicating the defect disorder and O/Ti stochiometry play an important role in the electrical properties of TiOx [1].

In TiO2 thin-films the conduction processes are mainly due to hopping i.e. impurity centers while contribution of intrinsic free carriers is negligible event at high temperature. To measure the conduction current through the dielectric film we prepare the MOS structure. Incorporation of metal dopant into TiO2 changed its electrical conductivity from oxide nonconductor to oxide semiconductor with the desired p (for metal Co, Pd) and n (metal 5th, Pd) type electrical conduction due to the incorporation of metal components.

In this work, we aim to examine the presence of various conduction mechanisms in pure as well as Fe doped TiO2 thin films and to correlate with the processing parameters.

We started with 0.5M titanium butoxide solution in isopropyl alcohol. This solution was partially hydrolyzed by adding a calculated amount of water while using HNO3 as catalyst for the hydrolization reaction as reported earlier [13]. The mixture was stirred vigorously with a magnetic stirrer till a clear and transparent sol was obtained. Calculated amount of iron acetyl acetonate compound, dissolved in isopropyl alcohol, was added in the TiO2 solution to obtain iron doped TiO2 nano-particles. Iron concentration was varied from 2 to 10-mol% in relation to TiO2 to have different doping levels. All the chemicals used were of AR grade and were used as procured without further purification.

As top Al electrodes were vacuum evaporated on the film to provide electrical contact the bottom electrode being ITO. The thickness of ITO electrode is ~ 500 nm and that of Al electrode is ~ 300 nm. Al was chosen since it has a low work function of 4.2 eV and should provide an ohmic contact with the TiO2; which has an electron affinity of around 4.0 eV. The value of 4.5 eV for the work function of ITO is larger than that of about an ohmic contact with TiO2 is expected to surface defects at the metal surface.

Copper wires were connected by Ag on the top electrode of film and on the ITO bottom electrode for electrical measurements. The substrates were dipped in the precursor solution and allowed to settle for two minutes before pulling out at a constant speed to obtain films of 140-160 nm thicknesses. Thin film of TiO2 that formed on the ITO coated glass substrates were dried in air at room temperature, followed by drying at 100°C for 30 min in an electric oven. The films thus formed were further annealed at 500 °C for 1 h in an electric programmable furnace. The temperature of the furnace was increased at a constant rate of 3°C per minute up to the desired value of 500°C. Iron-doped titania films were prepared from Fe doped precursor solution. Iron acetylacetonate [Fe (acac) 2] was used as basic material for doping TiO2 precursor. Addition of iron acetylacetonate yields more homogeneous distribution of iron for each film [14]. The I-V characteristics were measured with the help of Keithley 617 programmable electrometer in the voltage range from -30V to 30 V. The ITO/TiO2/Al heterostructure was prepared by depositing the TiO2 on the commercial ITO coated glass substrate and Al top electrode was fabricated by the vacuum deposition technique

TEM images of pure, 6 mol % and 10 mol % iron-doped TiO2 films taken at accelerating voltage of 160 KeV, are shown in figure1. The inset in figures 1(a), 1(b) and (1c) shows the electron diffraction spectra of the samples. Polycrystalline growth has been identified in all the samples, the crystallites are randomly oriented and so lattice planes, on the substrate surface. TEM   studies reveal the existence of both anatase and rutile phases of TiO2 in the samples. 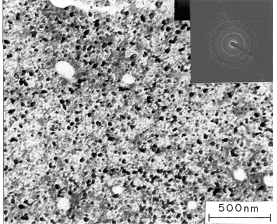 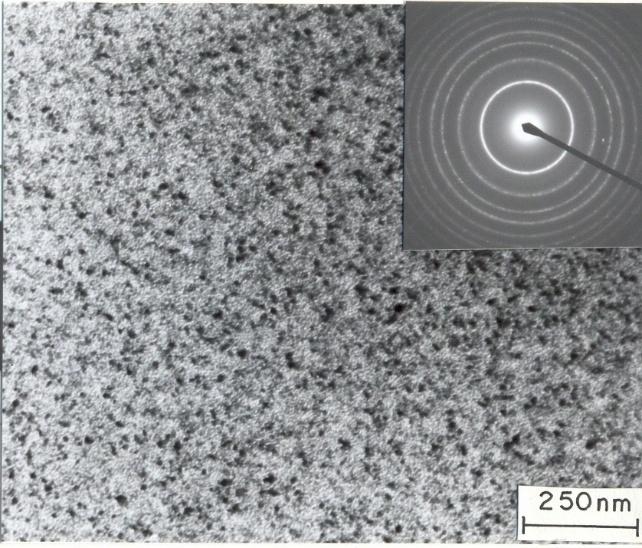 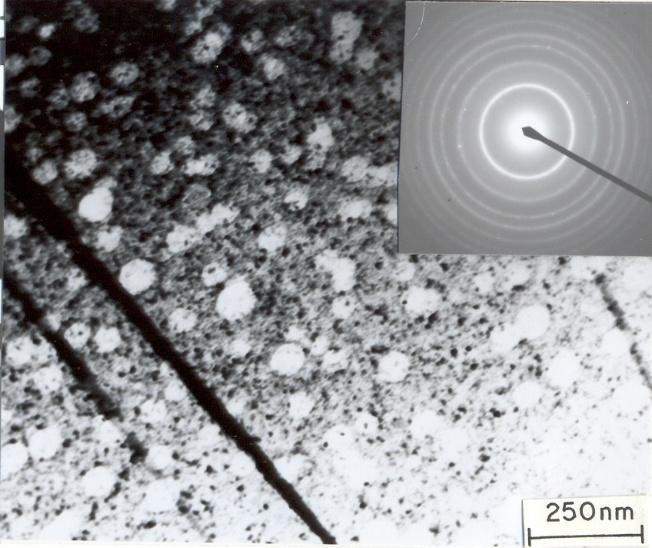 Particles are spherical in shape in pure and iron doped TiO2 thin films. The pores of different diameters are present in all the samples. The average diameter of spherical particle is 35 nm in pure TiO2 film, while its value is 20 nm and 17 nm for 6 mol % and 10 mol % iron doped TiO2 films respectively. This indicates a decrease in particle size with increase in Fe doping concentration. The particle size decreased due to change in the surface charge and distance between the particles in the TiO2 solution. Electron diffraction (ED) patterns have been used for phase identification as shown in insets of Fig. number 1(a), 1(b) and 1(c) respectively.

Schottky emission is a conduction mechanism that if the electrons can obtain enough energy provided by thermal activation of the electrons in the metal will overcome the energy barrier at the metal dielectric interface to go to the dielectric.

Fig. 2 shows the I-V curve of the MOS arrangement (Al/TiO2/ITO) hetrostructure at room temperature in the voltage range from -30 V to 30 V. I-V curves are ohmic in low field region and non-ohmic in higher field regions for all the samples. It is clear from the graph  shown in figs. 2(a) and 2(b) that more than 2 mol % iron doped samples the resistance changes from LRS (Low resistance state) to HRS (high resistance state). In the ohmic region the I-V characteristics should be of the form 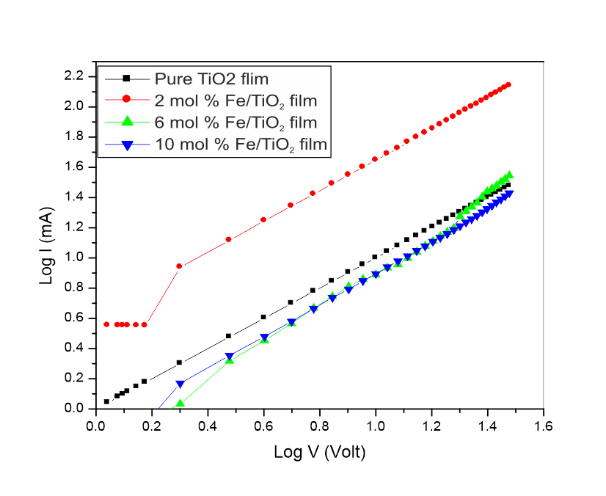 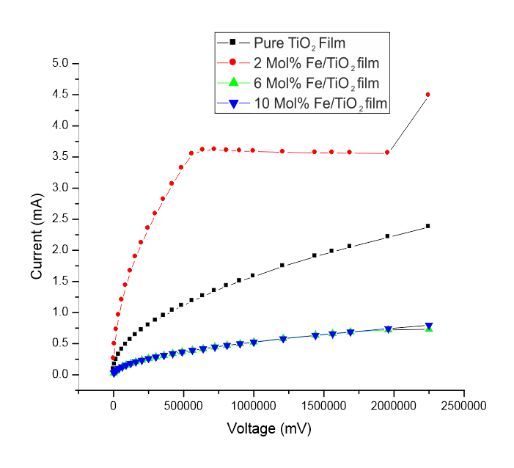 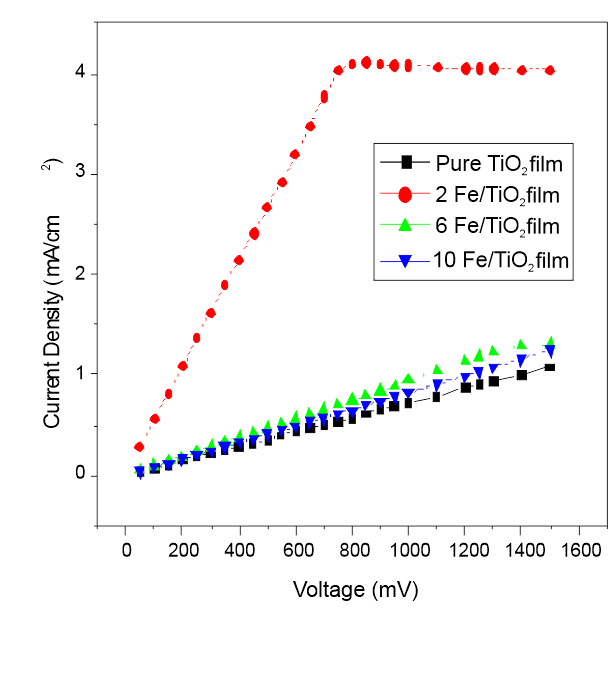 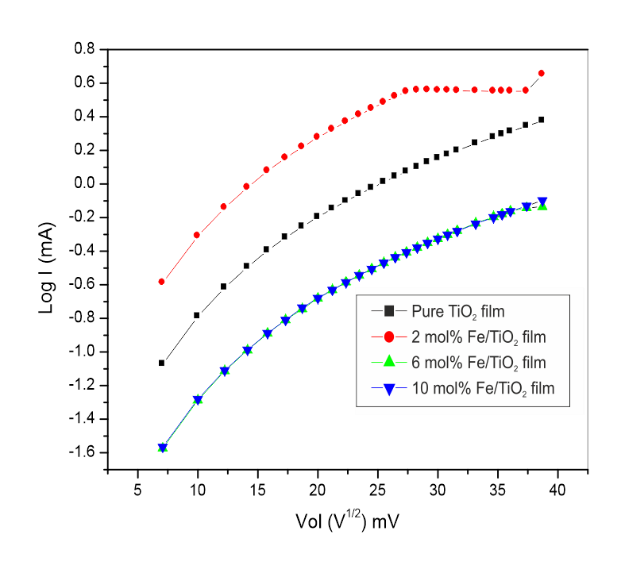 The values of slopes are smaller than those of required for space charge limited conduction. Iron acts as an acceptor impurity the dopant elements like Ca and Mg incorporated in TiO2 matrix act as an electron acceptor and decreases the electrical conductivity [16-17]. The consequence of space charge limited conduction is given by Child’s law  I=kV2, Where k is constant and is taken equal to one. I and V are the current and voltage respectively. 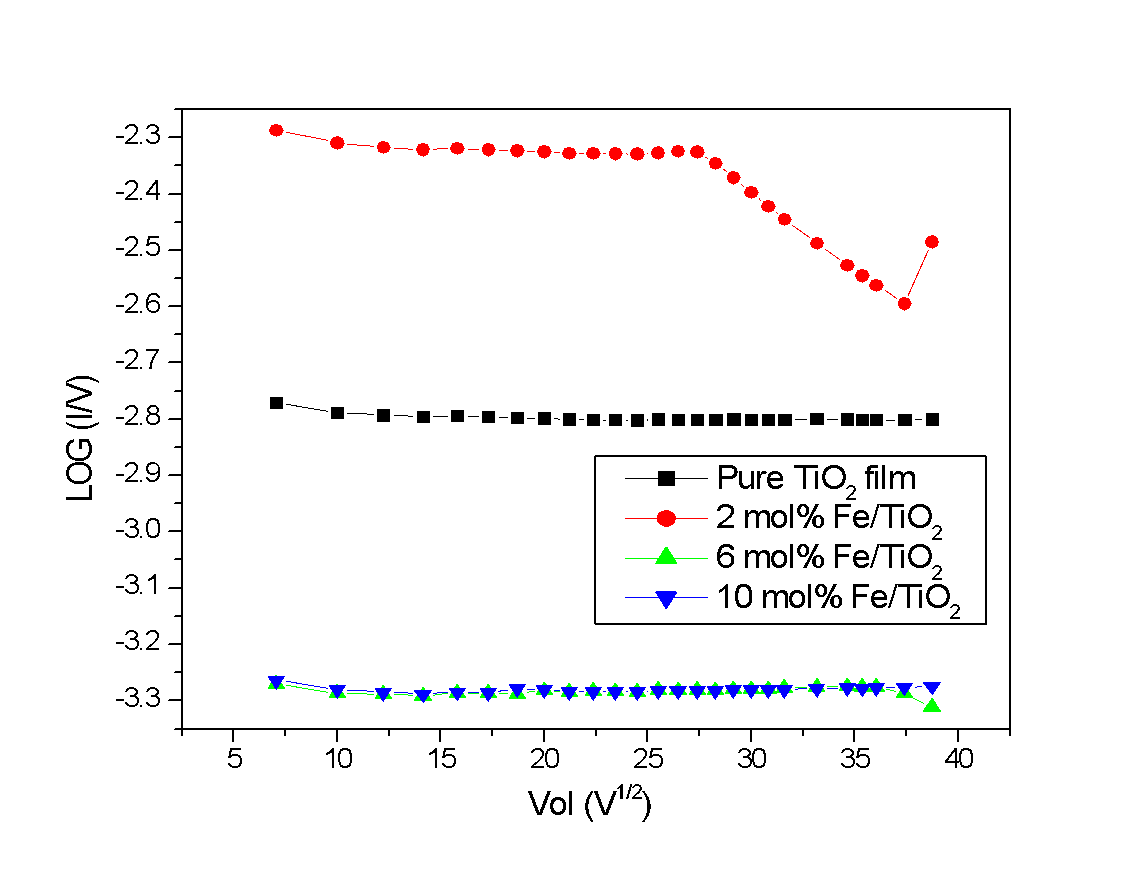 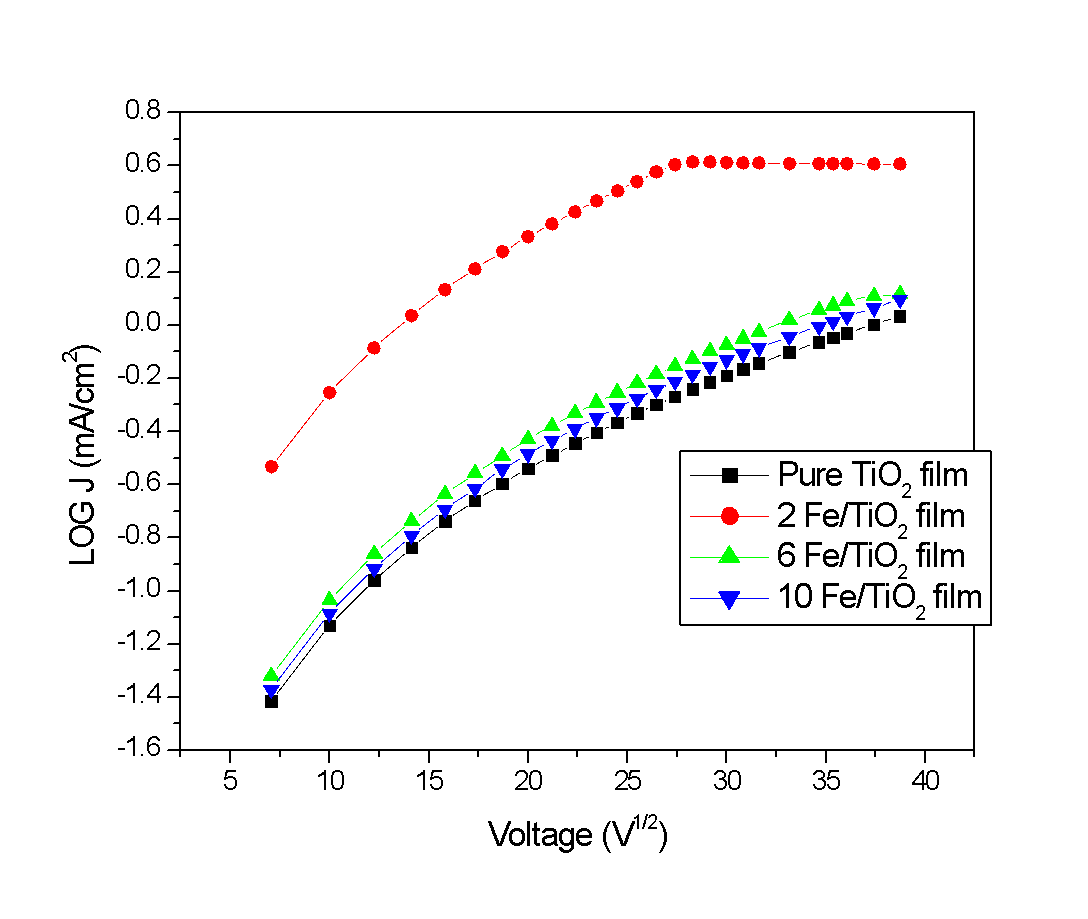 A plot of log J Vs. V 1/2 and log I/V Vs V1/2 yielded   approximately straight lines as shown in figs 2(e) and 2(f). These confirm that the conduction mechanism is due to Poole-Frenkel. Highest value of leakage current density is in the case of 2 mol % iron doped TiO2 films.  The presence of Pool-Frenkel conduction mechanism is due to the high density of traps due to this it generally occurs in thin film materials having high value of dielectric constant. In Pool Frenkel effect electrons are trapped in the localized states and due to random thermal fluctuations they will get enough energy to get out of localized state and move to the conduction band.  PF emission is dependent on the concentration of trap centers (Nt) and donor centres (Nd). (1) When Nt< Nd then conduction mechanism is normal Pool- Frenkel emission, (2) When Nt=Nd then PF mechanism is called the modified PF conduction mechanism or anomalous PF effect. In such a case the slope of PF the slope is of plot is reduced by half and equal to the slope of Schottky plot. The effect of different electrode materials on the conduction characteristics is a valuable means. 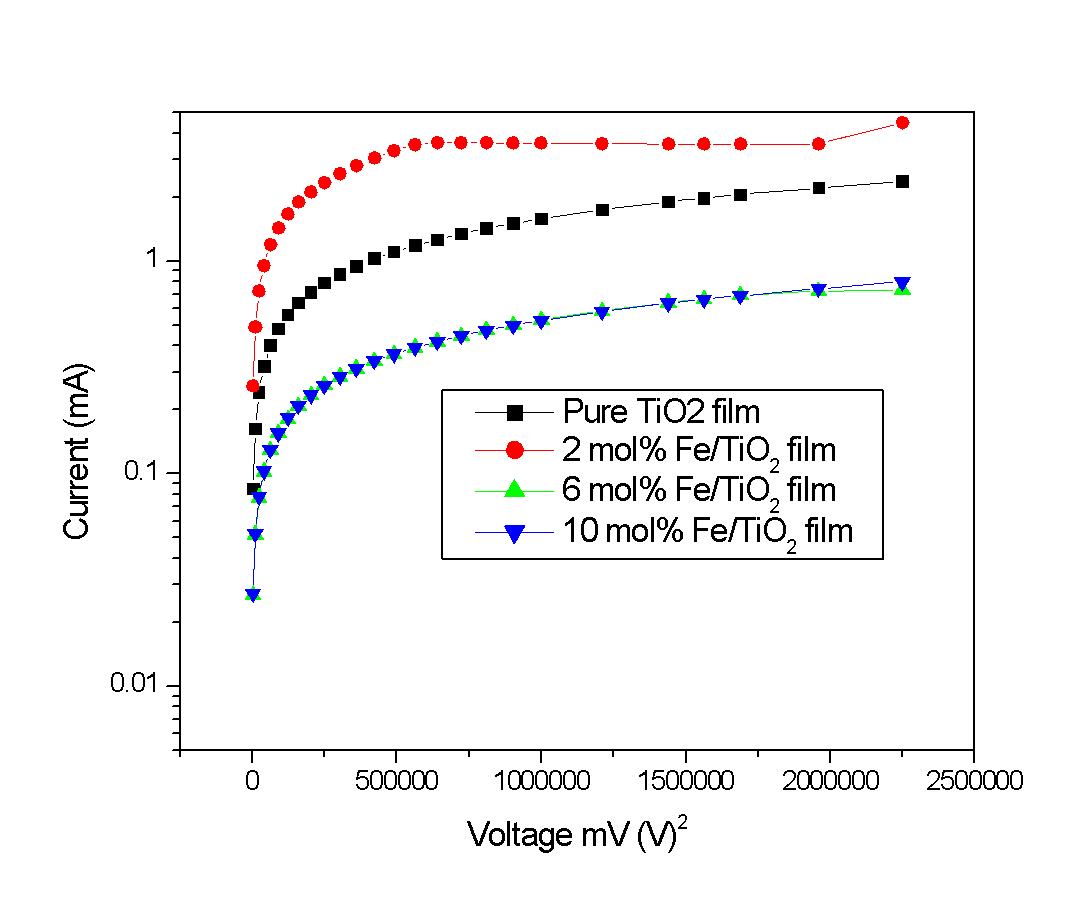 The authors have suggested that this nonlinearity originates from a transition from field emission to thermionic emission as the applied field decreases [18]. The roughness of the films can be a factor to influence the electron transport in the junction interface of the MOSFET. With metal ion doping surface roughness of the films increases as already reported [19].

There is asymmetry of the electrical properties when the top and bottom electrodes are made of different metals. Different metals lead to different work functions and therefore results in different metal-dielectric interface. Since different types of conduction mechanisms can give rise to non linear characteristics, one can first explain observed non linearity in terms of Richardson Schottky or Pool-Fenkel type of conduction mechanisms. Schottky emission occurs due to thermal activation of electron over the metal oxide interface barrier because of lowering of barrier height due to the applied field. The Poole-Frenkel effect is similar to the Schottky effect except that it is applied to the thermal transfer of electrons from traps into the conduction band of the insulator. In both the cases Log I Vs. V1/2 characteristics are expected to be linear in nature as shown in                       fig. 2 (g).

In thin-films, transport mechanisms of charge carriers is strongly influenced by particle size and which depends on the deposition parameters [20]. In order to obtain larger grains with a small number of grain boundaries, then the effect will be the decrease of carrier scattering and finally on increase in electrical conductivity.

We are thankful to Director NPL, New Delhi (India) for providing Research facilities.


More in this category: « The Underlying Vectors and Surfaces with the Same Timescales as Causes of Order Emergence in the Turbulent Flows A New Model of Human Needs »