Introduction: The role of zinc is critical to reproduction potential. Seminal zinc is thought to be derived almost exclusively from prostatic secretions. Sperm motility is significantly influenced by zinc. Zinc deficiency has been linked with male sterility and subfertility.

Materials and Methods: The semen samples were obtained from 300 male partners of infertile couples who attended the Department Biomedical and Genetics of the Hanoi medical university within the age 18-50 years and semen samples were analyzed for the routine seminal parameters. Routine semen analysis was performed according to WHO 2010 guidelines. After the semen analysis, samples were centrifuged at 1500 x g for 10min and zinc and fructose concentrations assayed from the supernatant (i.e. seminal plasma). Zinc concentration was assessed using spectrophotometry (5- Br- PAPS method) - direct colorimetric test without deproteinization of the sample. At pH 8.6, in a buffered media, zinc reacts with specific complexing 5-Br-PAPS form a stable color compound.

Conclusion: Complete the kit for determination of zinc concentration in semen by colorimetric method.

Infertility is defined as the failure of a couple to achieve a pregnancy after at least one year of frequent unprotected intercourse [1,2]. It has been reported that the male partner contributes in 40% of the cases of infertility. Globally, the incidence of fertility is estimated to be about 13-18% [3]. Due to the various reasons caused male infertility, it is essential to identify appropriate diagnosis methods to detect them.

There are many tests that have been applied for several decades such as semen analysis, genetic tests and hormones methods. Recently, some of biochemical markers including zinc and fructose are becoming significant implications for diagnosing the cause in male infertility [4].

They have thus been established as good indicators of human male fertility. An understanding of the factors affecting these characteristics is critical to proper understanding of the mechanisms underlying male infertility [5,6] Zinc is another factor essential for male reproductive system. Deficiency of zinc in the reproductive system causes hypogonadism and gonadal hypo function [7,8]. Many studies have shown that zinc plays an important role in the normal development of testicles, prostate and sperm motility [9,10]. However, in Vietnam, test for determination of concertation of zinc in seminal plasma was be put into use in 2013 at the Hanoi Medical University Hospital, and is increasingly popular in clinics. The need to use test kits to quantify fructose in semen is increasing. However, in Vietnam there are currently no units or establishments that produce this test. Therefore, all tests must be imported from abroad with many intermediate costs increasing the cost of the test many times.

The formula for a sample size for a descriptive study by S.K.Luanga and Lemeshow [11]:

To calculate the sample size to determine sensitivity, specificity and equivalence:

We took the sample size of 300 to increase the accuracy. On the same sample of semen, we measured fructose concentrations twice methods: once with the IVD kit (Fructose test, Fertilpro company, Belgium) and once with the improving kit. The difference between the two methods was based on Pearson correlation, T-test and Bland-Altman plot.

Criteria for selecting subjects: semen samples from male patients of reproductive age from 18 to 50 years without acute illness and consent to participate in the study.

- The person disagrees with the study.

3.1  Principle of the Method

Direct colorimetric test without deproteinization of the sample. End point increase. At pH 8.6, in a buffered media, zinc reacts with the specific complexing 5-BrPAPS, forms a stable colored complex. The color intensity is proportional to the amount of zinc present in the sample.

• Measuring the concentration of zinc:

The procedure for fructose quantitative testing in semen:

The steps are as follows:

Step 1: Semen sample is centrifuged at 1500 rpm for 10 minutes. This step is used to settle the sperm cell down to the bottom and only take the top of the semen containing the fructose for testing, as the sperm is not used in the test.

Step 2: Give 200 μl of supernatant to 200 μl TCA 370μmol/L , mix well, centrifuge at 10000 rpm for 10 minutes. This step is used to remove the protein (after centrifugation, the protein will be precipitated, only recover supernatant which zinc).

The sensitivity and specificity are calculated according to the formula:

Statistical analysis was performed using SPSS version 16.0. The means were compared using student t test. The statistical tests were considered to be significant at the p≤0.05 level.

The color intensity of the mixture is proportional to the concentration of zinc in the seminal plasma. The linear regression equation was used to describe the dependence between zinc concentrations in seminal plasma and measured photometer densities. 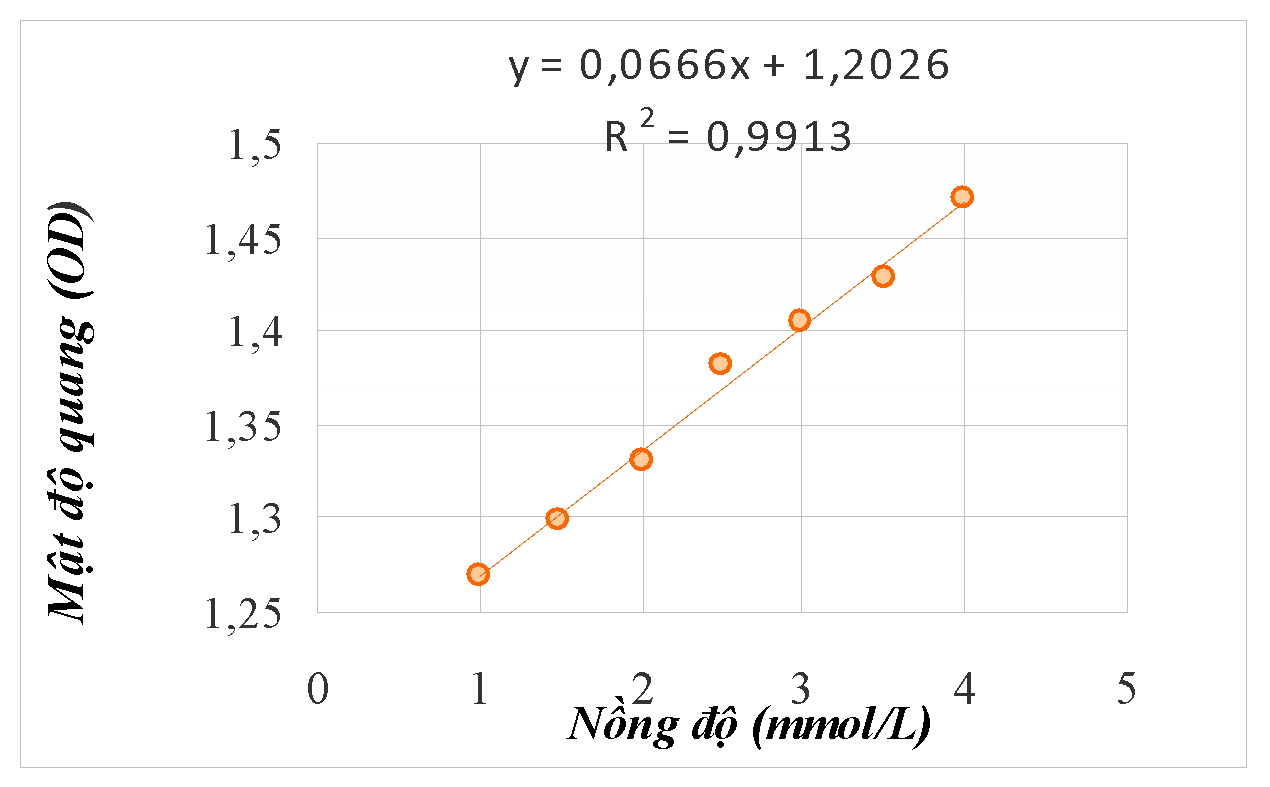 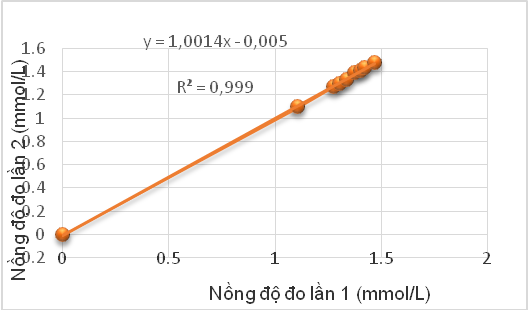 3.2. Determining the accuracy of the kit

The repeatability: From the results in the table above, we calculated the standard deviation of SD = 0.004 and the coefficient of variation CV% = 0.27. The variation coefficient of the self-mixing kit is within the allowable limits (CV% <5%).

The trueness: With the above results, we calculate tex = 2.076. In addition, through the table look at tt = 2,262; tex < tt so we achieves testing standards.

4.3. The sensitivity and specificity

4.3.1  The sensitivity and specificity

Table 3.1:  Statistics of Zinc Quantitative Results in 3 Groups of Patients

Table 3.2:  Index of Indicators to Calculate the Sensitivity and Specificity

The sensitivity and specificity are calculated according to the formula:

3.2. Assessing the capability of detecting the concentration of zinc between the self-mixing kit and the commercial standard kit 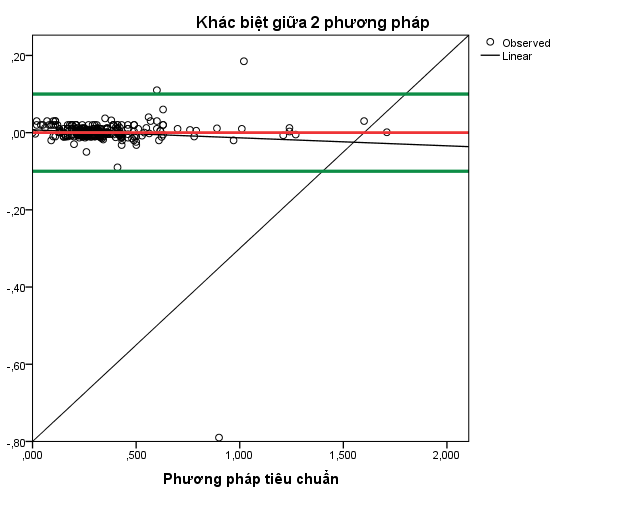 Figure 3.1:  Bland – Altman diagram assess the capability of detecting zinc concentration between the self-mixing kit and the commercial standard kit.

Comment: The self-mixing kit has a tendency of giving higher results than the commercial standard kit. The difference between the 2 methods of detection is random ( the value points are dispersed and follow no pattern) and the error deviation is not connected to the zinc quantification results.

When mixing chemicals, due to subjective or objective reasons, there may be error factors that led to different results between the 2 tests. In this kit, to minimize those factors, to ensure result stability between the  tests, each time we mixed chemicals, we proceeded to build the calibration function.

Phương trình hàm hiệu chuẩn là y = 0,9977x, hệ số tương quan R2 = 0,9995. Such as computational, quantitative results when using chemical batch after need with coefficient 1, meaning that no additional coefficients. It can be seen between the different batches of chemical test no significant difference in the test results.

In trials, especially quantitative testing, there are a number of error factors that affect the test, leading to inaccurate results. Therefore, in order to control these confounding factors, it is necessary to use the precision. Precision results only depend on the random error factor that is not related to the actual result of the sample. The lower precision the standard deviation, the greater the variance.

In this study, our self- mixture kit has a repeatability with a CV% coefficient of 0.27%, so that the coefficient of variation does not exceed 5% indicates that satisfies the requirements of the analysis.

Thus, when the effect of random error elements is the same, the concentration measured under different conditions has a tolerable range.

The trueness of the method shows that the degree of proximity between the result obtained and the actual value or accepted value is true (μ).

By experimentally testing the trueness, the result we obtained is tex = 2.076. Also, when looking at the table, the tt value obtained is 2.262. This means that tex < tt, and the concentration of fructose measured from this method has the same effect as the actual concentration of the sample. The process achieves the required accuracy of an analysis.

A good test kit should have high sensitivity and specificity, which means that the kit has low false positives and false negatives. These are two important criteria for evaluating the quality of a analysis kit.

Our kit achieves a specificity of 100%  and the sensitivity is 100%. It is therefore possible to use this kit to quantify fructose in semen with high reliability.

To reassert the accuracy of our self-mixing kit, we continue to compare the results obtained by our kit with those of the standard kit.

The chart shows that the difference is completely random and independent from the standard scale.

In our kit, we transform proteins using TCA 370 mmol/l. TCA is a non-poisonous, common, and easy to purchase acid. Transforming proteins before mixing them with color indicators limits the possibility of proteins reacting to the color indicator and produce a mixture of inaccurate color. In this way, the accuracy of obtained results is considerably improved.

Moreover, our self-mixture test kit uses only simple, low cost, common, easy-to-buy, and less chemicals than commercial kits.  The IVD kit we use in this study is the Fructose Test (Belgium), which is being used widely to measure fructose in semen in laboratories today. This kit also follows the principle of colorimetric method, but indol is used as an expensive chemical that is difficult to buy in Vietnam and requires the use of a color rendering stopper. In addition, the kit must be imported from abroad, through many intermediate stages leading to the cost of testing high. This means that our kit is more suitable for use in Vietnam, where determination of zinc concentration in seminal fluid is in high demand, yet the average annual income remains only average.

With the achieved advancements, we hope our kit can soon be subject of quantity production, replacing current imported kits in health institutions.

However, in this study, we have only tested the kit on laboratory-scale. Assessment on industrial scale is fundamental for the kit to become subject of quantity production.

The results show strong correlation between the 2 methods (r=0,975; p<0,001), the average difference between the kits is 0,0002 , equivalent to 4.94%.  The diference has no statistical significance. Most cases were within ± 1.96 standard deviations.

The authors would like to take this opportunity to extend my sincere thanks to Ministry of Health for providing financial support for the study. We also are grateful for the technical support of the Hanoi Medical University Hospital for the assay of the seminal fructose concentration.