Statistical Evaluation of the Performance of the Neural Network

In this paper the problem of evaluating the performance of the neural network, based on a study of the probabilistic behavior of the network is considered. Direct propagation network consisted of layer of input nodes, hidden layer and output layer is examined. To evaluate the network performance the mathematical expectation and dispersion of weight at the input of the output layer are considered. For such networks the estimates for some of the statistical characteristics of the neural network in the case of two recognized classes were obtained.

Statistical Evaluation of the Performance of the Neural Network

In this paper the problem of evaluating the performance of the neural network, based on a study of the probabilistic behavior of the network is considered. Direct propagation network consisted of layer of input nodes, hidden layer and output layer is examined. To evaluate the network performance the mathematical expectation and dispersion of weight at the input of the output layer are considered. For such networks the estimates for some of the statistical characteristics of the neural network in the case of two recognized classes were obtained.

Keywords: neural network, the weight of the neuron, recognition of the stimulus, mathematical expectation, dispersion.

They are successfully used to solve a number of tasks such as forecasting of economic and financial indicators, the prediction of complications in patients in the postoperative period, biometric identification based on various characteristics, image processing, and others.

All this is possible for the neural networks because of their ability to learn and to establish of associative connections in the input data. Typically, depending on the task, it is required to resort to different methods to transform input data, allowing a correct judgment about the laws and special features in the data that reflect their quality characteristics [4].

Artificial neural network is a mathematical model of biological neuron. It consists of relating to each other neurons. A neural network is exposed to learning by providing it with the input information in the form of numerical sequences. The training set up internal connections between neurons through which the network is endowed ability to recognize unfamiliar images. There are different types of neural networks that differ in both the topology and the learning algorithms.

In the neural network technologies an important role particularly play  the selection of the network architecture and the values of its parameters that affect its efficiency.

A particular interest the study of the probabilistic behavior of the neural networks is presented [3, 4]. The neural network of direct distribution, which consists of a layer of input nodes, hidden layer and output layer is investigated. Neurons have a one-way communication, do not contain links between elements within the layer and backward linkages between the layers. The neurons of the input layer are connected to the hidden layer neurons with excitatory and inhibitory connections randomly. The outputs of all neurons in the hidden layer neurons are connected to the output layer. Neurons in each layer are referred to as the input, hidden and output elements, respectively [1, 2, 4]. Neurons have unidirectional links and do not contain links between elements within a layer and feedbacks between the layers.

where σn and σm are numbers of excited and inhibited bonds from excitatory and m inhibitory connections respectively, θ is threshold of hidden element (integer number). Excitatory and inhibitory connections between the input and hidden layers are assumed to be randomly and uniformly distributed. The outputs of all elements of the hidden layer are passed as an input to the output layer that implements the function R:

The structure of the neural network allows to correct errors during incorrect responses by means of gradual complication of decision rules. This is done by changing the weight vectors.

Let us determine the weight of the hidden element after training.

At the stage of neural network training, a training sequence of stimuli is presented to network. For each stimulus a hidden element is tested for activity, and all the active elements of the hidden layer are encouraged with values δi (i = 1, 2) for the i-th class of stimuli.

If each class has, respectively, l1 and l2 representatives, then after training via the sequence  of two classes activators of the length L = l1+ l2 ,  in the k-th hidden item  the weight  Vk is accumulated:

where V0- is a initial weight of k –th hidden element.

When at the input to a network is  the stimulus  ξt , so  the input of the output layer is fed weight (k=1, …NA)

The belonging of  pathogen ξt  to one of two classes is determined by comparing of the weight Ut with a threshold output element R. When Ut>θR  so we have first class. When U<θR  - second class. When Ut= θR - refusal of recognition.

For the given network, a predetermined training sequence and a predetermined reference stimulus ξt, the weight Ut has a certain value. However, for the class of neural networks the Ut  is a random variable. To determine the probability, that the network selected from a class, correctly classifies stimulus ξx, is required to calculate the probability characteristics of the random variable of weight Ux, supplied to the input of the output layer.

According to the modified Chebyshev inequality [6], for any random variable z with mathematical expectation Mz=µ  with any dispersion Dz= σ2 we have following relations:

where P – is the probability of the corresponding event, σ- average quadratic deviation. Equations (5,6) can be used to estimate the probability of a correct response of network on ξx with θR=0 in the case of two recognized classes.

From the (5, 6) it follows that the probability of correct recognition  increases, if  attitude σ2/μ2   tends to zero.

With appropriate probabilistic characteristics of the network, we can estimate the probability of a correct  response  of  network  on ξx. If the relation

σ2(Ux)/ µ2(Ux) can be made arbitrarily small, then for a selected network with θR=0 the probability that a stimulus ξx  is classified correctly  seeks to 1.

Theorem. Let the a set of pathogens Ω={ ξ} , Ω=Ω1 U Ω2, Ω1 ∩ Ω2=Ø, and training sequence ξ1,ξ2, …ξL are given. Then the expectation of the weight input in the output layer when the stimulus is from the i –th class is equal to

Having µi, let’s estimate dispersion of random variable Ux with appearance of the pathogen ξx at the entrance of the network.`

where Pjx- is probability of excitation of hidden element when displaying incentives ξj,ξx .

Assessing the probability Pjrx,Pjx,Prx the expressions for the dispersion will be recieved.

First case: assume that the control stimulus ξx € Ω1. For the stimuli ξj and ξr in this case we obtain the following probabilities: 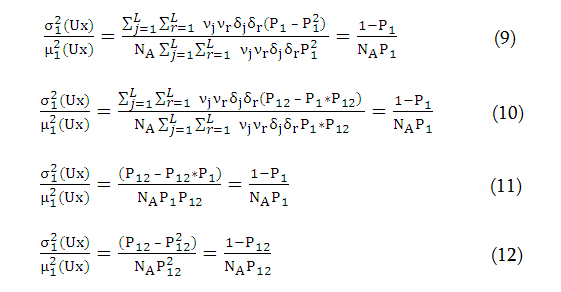 The probability of detection for the first class is increased by the maximum value of P1- P12, called the characteristic function of the perceptron (CFP) [4]. Obviously, the function CFP seeks to a maximum value at P1→1.

In assessing the value of

again see that P1→1 when

→0 (in most of the discussed cases). For the first class of stimuli the condition

→0  is received at which execution CFP →max, i.e. the probability of correct recognition for the first class stimulus increases.

For the stimulus ξj and ξr in discussed case the following probability will be obtained:

, for the second class will be received the condition for correct recognition:

Therefore we received new conditions to  increase of the right recognition for the stimulus of the i-th class:

The resulting estimates for certain statistical characteristics of a neural network in the case of two recognized classes have shown efficiency in the training of neural networks. Moreover, a new condition for improving accuracy of recognition for the stimulus i-th class is received.


More in this category: « On enforcing relational constraints in MatBase Survey on Current Trends and Techniques of Data Mining Research »